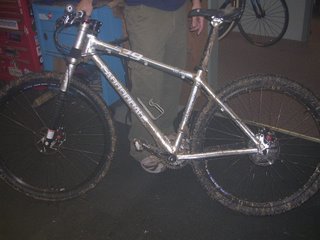 Like the foggy nature of this picture, the F-29's character is still not quite clear to me........yet!

So far, several people have had the chance to throw a leg over the Caffeine 29"er from Cannondale here in "Guitar Ted Land". The initial responses have ranged from high praise to downright hatred. It seems that getting a consistent reaction from folks on the bike isn't going to happen. I think I'm beginning to see why that is.

My initial impression is that this bike is far different than any of the other 29"ers that I have ridden so far. It rides like a big couch, for one thing, which surprised the heck out of me, considering that it is an aluminum hardtail after all. The sharp jolts and bouncing off the saddle just didn't occur as I was expecting at first. The steering geometry was strangely different and I wasn't sure if it was all the Lefty or what. It seemed to not really like a steer from the hip kind of input, but rather a more aggressive "throw it into the corner" kind of style that required alot of upper body input. In the tight single track, I was able to just let the bike roll through the corners in a lazy fashion, which seemed to suit the bike well. The higher speed handling in the tight stuff wasn't going to happen on that particular ride due to a drivetrain issue unrelated to the bikes frame or design, so I'll not mention that. Another ride in the same area is planned soon.

The Lefty strut, which is an integral part of this bike, rode really well. It felt stiff torsionally and laterally. It is still in it's break in period, but it felt pretty smooth and soaked up alot of trail chatter. The big bumps were nothing to this suspension unit, and it plowed right over small logs and branches with impunity. The lock out feature was a welcome and easy to operate feature while riding. I never felt any strange sensations or "pull" to one side or the other due to the one legged design. It rode like a bike, that's all.

I've got to put the measuring tape and angle finder to this bike and also ride it a bit more. Just by feel though, I'd say that this bike is more laid back in the front end and steeper in the seat tube than alot of other 29"ers out there. It gives the sensation that it would be a great endurance or long distance bike. It's not twitchy, nervous, or anything close to that in the handling department. More ride time will be required to ferret out it's exact nature.

The only concern I have coming out of this first period so far is the bottom bracket flex. It flexes during pedaling from side to side which is visible as you watch the space between the rear tire and chainstay near the bottom bracket. I wouldn't notice it though, if I wasn't looking at that. I guess I have to work on my spin! The front triangle feels quite stiff and laterally and torsionally solid.

Stay tuned for more to come on the Cannondale Caffeine F-29.