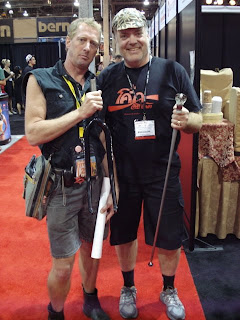 <===Meeting 29"er history. Wes Williams, a big reason we have 29"ers in the first place with me at Interbike. (photo credit: Bob Poor)

Okay, here are a few things I thought ya'all might find interesting from last week. First off, we have a chance meeting with two guys that figure pretty heavily in 29"er history. Wes Williams of Willits, who is pretty much responsible for the moniker "29er" , was instrumental in helping get the Nanoraptor done in a 29"er size, thus ushering in the modern 29"er era, and built the first bike that sported that tire. Yeah, pretty cool stuff.

That "thing" I'm holding is called "The Pontificator", a titanium "staff" that Wes used to bring with him to Interbike in the early 29"er days to "pontificate" with on his new wheel sized bikes. Wes is quite the character and a pretty intense fellow.

The guy who took the photo was also a figure noted for his online presence and promotion of the 29"er. The way I write - 29"er- is a tribute to him and in recognition of his influence on myself in getting on board with the whole 29"er gig. Thanks guys! It was great to meet both of you! 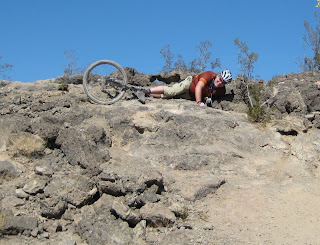 Here's a look at my tumble I took on Tuesday, he second day of the Outdoor Demo. I was riding a trail not marked as a demo trail that had these rock outcroppings going down hill. I didn't see that this feature was a three to four foot drop until I got to the edge of it and I decided to not try it at the last second. The bike, a Felt carbon 29"er hard tail, was a size too small and I went over the bars to the left. I smashed my elbow and leg just below the knee onto this rock. Still hurts today! Got a nice bloodied elbow as well. Just a little souvenir from my trip. And anyway.....I'm smiling here, so you know it wasn't all that bad! 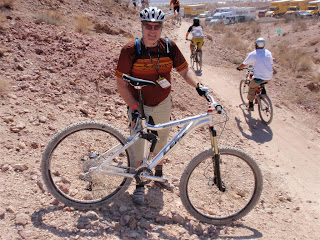 <===Let's Do Lunchbox! (photo credit: "crashtestdummy" from the mtbr.com forums)

Here I am on my ride on the Lenz LunchBox six inch travel 29"er that Mike Curiak had on hand for me to try out. What a great bike! I would be very tempted to own this bike, and I would get one, if I lived anywhere near terrain deserving of it. In fact, I'd love to ride this thing in El Paso sometime where the rocks and terrain most certainly suit this rig. Lenz does do five and four inch travel models and I suppose a Lenz Leviathan four incher would be a great bike around here.

The photo was taken right at the start of the Outdoor Demo loop which snaked away around to the left right behind me here. I took the "Box" for the full loop out near Lake Mead and back. Actually, this photo is after I had already ridden up into Bootleg Canyon and back down a western trail that swooped, curved, and had lots of rocky outcroppings, or "chunk" as the Westerners call it. I rode the "Box" for about an hour and a half which cooked me. (Especially after two or three other test rides that day) The temperature was hovering right near 100 degrees, it was dry, and I was working hard. I confiscated Mike Curiaks Fritos upon returning the Lenz to him and scarfed down the rest of the bag! Thanks Mike! It was a great ride and I appreciate your letting me have that opportunity.

That's about a wrap folks! Nothing more to see here about that crazy Interbike trip. The rest of the time I was working or eating at the food court in the mall on the Strip or sleeping. Not a very "Vegas-like" existence, but that town has little allure for me in that regard.

Now it's on to post-Interbike e-mails, getting back into the groove of writing and testing, and doing everyday life here. I am enjoying the fall weather and looking forwards to the all too brief fall off road riding here. Winter is coming, and I can't help but think of last years debacle. I'm hoping for a return to a "global warming winter", like we have experienced mostly throughout this decade. That'd be swell!