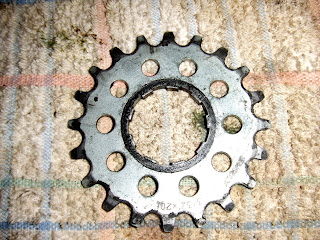 <====I only have one grody cog to give for this gnarly ride for sure man......
The single speed sickness is what I've got and it isn't going away. Nothing against gears, because I've got those bikes too, but I just have a predisposition for cranking on one gear. Don't really know why, but I have always felt comfortable just knowing I had to go with what I had on for a gear.
Take Interbike for example. I had been cruising around on geared wunderbikes at Bootleg Canyon for nearly two straight days until I got on board a nice steel single speed. I figured I'd be toast. You know, two days in the blistering heat, and wind, with little to eat. Well, I went over that demo loop probably better on that bike than I did all the others. I actually made that my last ride too. I knew it was a great way to cap off the demo rides.
But then there are times it gets me in trouble, like at the Good Life Gravel Adventure. Sure, I only had three hours sleep the night before when I drove for five hours to get there, but that didn't have anything to do with it, did it? Naw! It was the stinkin' single speed that made me tired and had me spontaneously falling asleep on 30mph downhills. Right? I mean, a geared rig would have taken less energy and I would have been fine. (Or so I like to think)
Meh.......okay! It probably was the lack of sleep then!
Whatever it was, I still like single speeds and by golly, I keep seeing more I would like to have. Like this Singular Gryphon. Psick! Psingle speed psick!
Winter Is Coming- That means it is Project Time! Well, it will for me, I hope. First and foremost, I have an old steel touring bike that will be getting refreshed. I have some parts lying about that will go on it, but basically I am not looking to set it up for touring per se'. I am looking to set it up with some fatter tires and use it as a gravel speeder. I mean, I could always hang the racks back on it and tour, but that isn't going to happen anytime soon, so I think I need to use this bike or lose it. I can't stand having it just hang there not being ridden. So look for bits on that to show up here in the future.
Oh yeah, I updated the News Section on the T.I.V6 site. Ya better go take a look at that if you are interested.
Posted by Guitar Ted at 1:00 AM