A Bit Too Early

Every year I go back to my roots, so to speak, and try to hit the Fall colors in the Green Belt where I learned my first off road lessons back in the late 80's. Although the trail has been in a constant state of change through the years due to the flooding of Black Hawk Creek on occasion, a few things have not changed all that much.

One of those things is a view from the trail past a prairie grass field to a line of trees that borders the creek. Generally these are pretty spectacular if you can check them out when Fall is in high gear. Unfortunately for me, Fall has yet to climax here yet. Poor me! That just means I'll have to go ride this again soon!

The other thing I always do this time of year is to ride a single speed back in there. This alleviates the possibility of derailleur carnage from all the sticks, branches, and debris that gathers on the trails from a seasons worth of winds and rains. The Green Belt is a wilder, less kempt place where trails tend to be unpredictable in manner. Never more so than in Fall.

The Blackbuck was the steed of the day for this passage of the old bridleway and XC skiing trails. If any sticks decided to try and foul the drive train, they would meet with a crunch and snap from my chain and Surly cog.

The Blackbuck is also sporting the wide Salsa Cycles Gordo rims, (out of production, sadly), and on those I have the Kenda Honey Badger tires which have an excellent, shallow "C" crown to them when mounted tubeless to these rims. That rim and tire combination proved to be invaluable yesterday and helped me to decide that I maybe didn't need to get something I had been considering for a while.

See, I had to traverse several places on the trail where fine sand hand been deposited at a pretty significant depth from the creek's flooding activities this past Spring. Generally, it is fat bike territory, but I had been wondering if a 29+ Knard tire would maybe be sufficient. Of course, you have to have a compatible frame and fork for that experiment, and the only thing I have that is close is my titanium Salsa Mukluk. That requires different hubs than anything else though, and I wasn't too keen on spending the money on Rabbit Hole rims and Knard tires just yet for an experiment. Now, I am pretty sure I don't need them anyway.

The Honey Badger tires and Gordo rims made mincemeat of the sand sections. I rolled right on through, staying mostly on top of the sand, and not cutting in, or getting sideways with the front end. Sure, some of that could have been the Blackbuck, with its shorter wheel base and that making getting off the front end easier. However, I believe the wheels and tires were the key. This brings up another point....

I am pretty sure I will be having a set of the new Velocity Dually rims which will be laced to standard mtb hubs. Yeah......I know, pretty much the same deal, (in terms of rim width), as the Rabbit Holes, but not quite and that may be a good thing! With clearances limited on most of my standard frames, I may not be able to use them anyway, but we'll see. It is said that narrower, lighter tires are actually a great set up on these wider rims. Tires like the Honey Badgers, perhaps? We'll see. The Duallys are 10mm wider than the Gordos are, so it still may not work. I may not even bother, since the Gordo and Honey Badger tires are about as good as anything I've tried together. 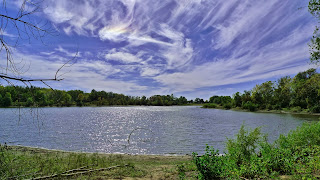 Well, anyway, the ride was most excellent and I went all the way down the trails that I could go. There is a place where you cross over to private land down there, and it isn't well marked, and probably not marked at all. I haven't ever seen a demarcation, but it might exist. I only know I am on private farm land when I see the field!

I didn't go that far, but I did every public route that travels mostly North-South all the way through the Green Belt and did a partial loop around the lake as well. I noticed the clouds were rather frothy and moving along at a great speed when I stopped at the lake to look. It was odd, but beautiful.

About this time I was getting tired, and I wanted to head on home, get cleaned up, and grab a bite to eat. I thought I was being a bit soft, but when I arrived at home, I noted I had been out at least 2.5 hours and in the Green Belt, you pedal about 90% of the distance traveled since there really are no hills at all. No wonder I was hungry!

While the Fall colors eluded me this time, I still had a great day out on the bike, saw an owl, and realized I had a great set up on the Blackbuck and may not ever need a 29+ rig for my local rides, despite the sandy traps out there.
Posted by Guitar Ted at 1:30 AM