The other day I was chatting with a customer and the idea of what has been the most influential changes in mountain bikes came up. I heard that some magazine or site had their ideas of what that might be. I figured I would jot down my thoughts without looking this article up and being influenced by........ well, there could be some interesting things written right here, but I'll let that go.

Here in no particular order are my thoughts on the four major changes that are the most influential in regard to hard tail mtb's over the last five years.
So, all of that has informed the rise of 27.5+ and all the "trail hard tail" bikes that have become as common as single speed 29"ers were ten years ago. All this "Plus" nonsense and fat bikes stuff along side of it has been radicalizing mtb hard tail definitions for the last five years to the point that the playing field is a crazy mash-up of all kinds of goofy choices. And where will we go from here?

In ten years, it will again be a different playing field. Think that is crazy? Well, consider how many choices there are for single speed hard tail 29"ers these days. 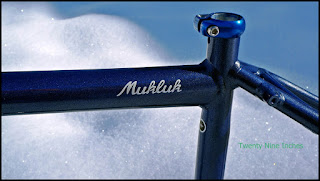 So, the good news is that I am a couple of cables and housings away from getting the Snow Dog back to life again. The bad news is that I keep forgetting about that. Yeah........

So, if I can manage to get my memory to work, I should get the Snow Dog built out and ready for next week's commuting duties. There was a surprise finding when I fished out the frame from its hiding place, which changed the direction of the build, and I have already made some plans for minor changes to be made. But first, I should get this thing up and running so any changes being considered will be worthwhile to pursue.

So, bottom line? Don't forget the cables and housings!

I should have a report next week after the resurrection of this beast happens.

Derailing Without A Derailleur:

It appears that many stock Salsa 2017 1X bikes and some other 1X rigs coming out now have the preponderance for derailing their chains off the chain ring when pedaled backwards. This all without the aid of a derailleur. What?

Is this some new voodoo? No.....it is some kind of mechanical/physical principle though. I've seen some really short-stayed road bikes do this when cross chained as well.

While I haven't seen any issues come through my repair stand or on my personal 1X set ups, I get why there could be issues. Remember, we are relying on a friction based, wide/narrow chain ring tooth profile to retain the chain. There also is another factor at work- tension. That is supplied by the rear derailleur these days and is maintained, or maybe "governed" is a better word, by the friction based "clutch" rear derailleurs. Tension is also created by pedal pressure. However; when you pedal backward, the dynamics of tension are changed.

Unless the chain line is perfectly straight, this chain derailment issue could easily happen if the chain ring teeth profiles are not completely spot on. Because that is the only thing retaining a 1X chain when pedaling backward, for the most part. Now, again- I haven't seen the issues I've seen detailed online, but it does stand to reason that this would be the case. Without a front derailleur, even multiple chain ring set ups will exhibit this issue when pedaling backwards. It wouldn't surprise me that unless you are using an X-Sync spec tooth profile ring, you could be experiencing this issue, and maybe even then you might be. But like I say- I haven't had this issue, so it could be something else entirely.

Okay, we're headed for a major deep freeze here. Negative 20 on Saturday night. Hopefully y'all are somewhere warmer and out riding. Have a great weekend!
Posted by Guitar Ted at 1:30 AM