The weekend was book ended by a couple of solo rides. One was on my fat bike in the Green Belt. Nothing too spectacular, but for me, a much needed ride. I've had bouts with a bit of depression lately, and I think this is due to what is going on these days. It gets to me, and I was super thankful to get that ride in just to clear my head out.

Sunday Mrs. Guitar Ted made me get out and go again. I was ready to, and agreed. This time it would be a longer ride. Gravel was on the menu, and I had a couple of routes in mind depending upon what the wind was doing when I left the house. I decided to take the Noble Bikes GX5, as this ride would help close out the Lube-Off testing for that chain lube on that bike. (More on that soon)

The wind was out of the Southeast, so South it was. The plan for this year is to try to knock out every gravel road I have not been on before in Black Hawk County. I've identified a few places in the county where I haven't been on the gravel yet, and this day's ride would knock out another chunk of that. I'd been on a portion of this road before, but not all the way to the county line. As I got out there, I looked and I was surprised to see another cyclist ahead of me.

Now typically I'd be excited about that, but in my current state of mind, and with what is going on now, I just couldn't deal with any sort of encounter. So, as soon as I saw the person ahead of me, and realized I was catching up fast, I slowed way down. Maybe this person will realize it was them and be reading this? If so, I apologize. It wasn't you, personally. I just did not want to deal with anyone on my ride. So, when I saw this person turn off, I blasted straight down the road and never saw another cyclist again until I got back into town, of course.

In a world where nothing seems "normal" anymore, it is such a relief to be out in the country alone. There is little evidence out there that anything is different. Animals move about freely, the wind blows, and the farmers still wave and do their thing with the dirt. In fact, the scene is quickly transforming from the dead, brown and sullen prairie to one of freshly turned dirt, greening ditches, and the warble of various songbirds can be heard everywhere. I even got chased down by a dog, and frankly, it made me smile. Just like it always happens every year.......

I decided to take a break after I had gotten out of the county and was about to go around a mile to start to take in my "new-to-me road" which started in the middle of nowhere, since there is no county line road on the Southern border of Black Hawk County with Tama County. I had brought everything I needed for a really long ride, just in case. Food, water, tools, and a tube and pump. Self-supported rides are my usual, but these days, it doesn't hurt to remind that we all need to take on the self-supported ethos for now.

Once I got on this chunk of road I hadn't been on yet I, of course, saw a bunch of barns I hadn't seen yet. So, you are going to get a few "Barns For Jason" pics here.

The other thing about this new section of road for me was that there was a lot of action going on in the field. Big rigs, old rigs, and even side-by-sides running around. At one point I came across a truck sitting on the road where there was some tractor going around near the road pulling what looked to be some sort of seeding machine. As I approached I saw a flock of little hands fluttering outside the cracked side window of the truck waving as I went by. Cute..... 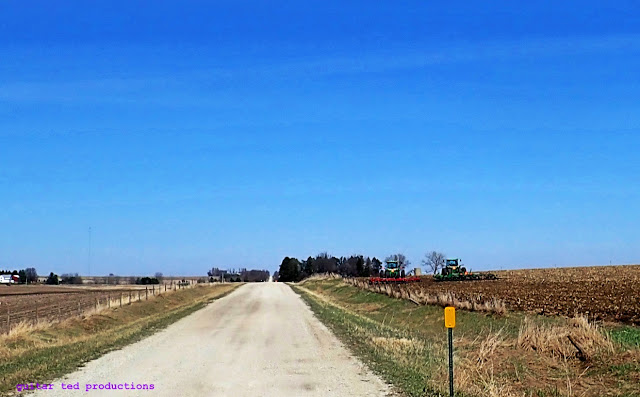 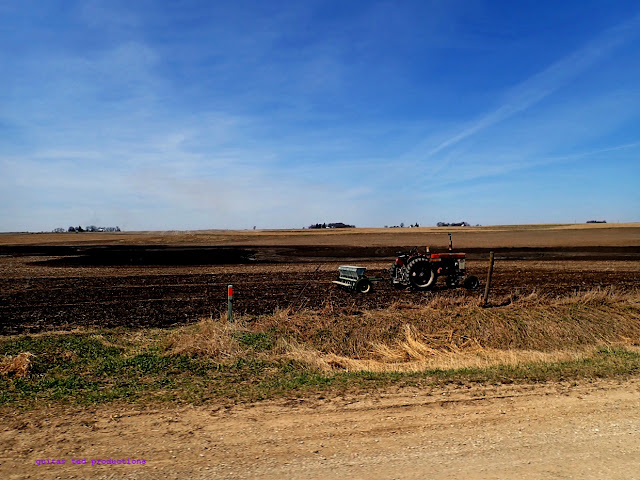 Once I got going North it was a lot easier going. The roads were maintenanced in Tama County not long ago, but with the wind at my back it didn't matter. The Vittoria Terreno Dry tires just rolled right on through there and once I got back into Black Hawk County the roads were smooth and very fast. In fact, it is pretty much mid to late Summer like conditions now. There are places so dry that the roads are "blowing out" and turning into sandy, deeper sections. We could really use some rain, by the looks of things out there.

After about three hours I found myself back home again. I had a long sleeved wool jersey on, because it was in the 40's when I started and went up to 60 when I finished. Total Sun drenched day, and my hands, which weren't covered, actually got Sun burned! I could feel the tingle when I got home. Guess it is time to start thinking about SPF lotions again!
Posted by Guitar Ted at 1:30 AM

@DT - I was thinking of you when I took those, actually! Enjoy!