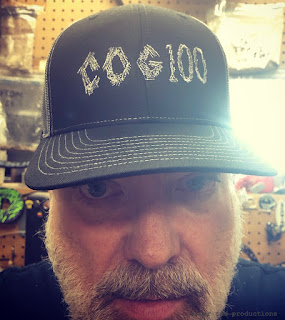 The latest on the inaugural C.O.G. 100 is that we are on track to get things done in time for the event. So, I'm pretty happy with where N.Y. Roll and I are with things so far. The latest detailed update follows.....

Hats: The hats are done and in N.Y. Roll's possession. Remember- you have to actually show up to the event to get your hat. We are not in the business of shipping hats to folks who can't be arsed to show up, so don't even ask us.

That said, we are stoked on the final product. I guess they are "trucker hats", but I don't know about that. Real "trucker hats", at least the ones I remember from the '70's, were really tall in front. Like almost flat, not really rounded. Anyway, these do have the mesh back, so that part is right.

I used to have a friend back in the 90's that told me all the time that "quality caps have 8 stitched bands on the bill". Well, count 'em. Eight stitches. Quality defined. (Ha!) That same friend always said that eight banded bills would hold up to your forming no matter what. Yes folks......flat brim was stupid back in the day. And anyway, my head is so long and narrow that "flat brimming" a hat is a no go on my noggin' So, call me retro, but my bill is curved, yo......

One more thing. It doesn't show here, but the logo is made from shiny thread. It's pretty "bling-tacular" if I do say so myself. But that aside, Tony at Bike Rags got the feel and look of my logo down 100%. It's really spot on.

So, that was a lot of non-sense about the hats, but that ain't all. We have one other special thing we're doing, and it's currently in process, but I do have an example to share today.........

Poster: The art work for the C.O.G. 100 poster came from an "Inktober" challemge I was doing with my daughter last year. I thought this was appropriate as a poster for the event, so I had my daughter tweak it out a bit and we added the logo, and boom!

There will be one poster for each rider that shows up. Limited run of prints here which will be signed and numbered by myself and my daughter. We're pretty excited to get these out. Right now my daughter has about half of what we need printed and is doing these in her art class at school.

N.Y. Roll has insurance duties,and I'm not sure where he is on that, but he mentioned needing to get that done recently, so I trust he's on it. Once the snow clears out we'll do a final recon and cue sheets will be printed right after that. Then we have an event! Oh....... and one more thing. We have been talking about meeting anyone that cares to, the night before the event. Nothing "mandatory", just time to converse and see those we haven't seen in awhile. We plan on hanging out at the Peace Tree Brewing- Grinnell Branch. This will also be the unofficial-official hang out after the event too. More details soon.
Posted by Guitar Ted at 1:30 AM

Hats look RAD as does the poster, can't wait to get my grubby mitts on both of them.