This Page Discloses What The "Standard Disclaimer" Is And Why I Use It In The Blog Posts.

The Disclaimer: (Generalized for the purpose of example) Notice: XYZ Company sent over its Widget for test and review to Riding Gravel/Guitar Ted Productions at no charge. We are not being paid, nor bribed, for this review, and we always strive to give our honest thoughts and views throughout.*

Why I Use A Disclaimer: Since I started blogging in 2005 I have been reviewing product for different sites. Those sites are listed here below:

Along about 2008-2009,  The Federal Trade Commission, (FTC), recommended that bloggers and internet media reviewers start using a disclaimer to provide the readers with a clearly stated disclosure of where products on the site were coming from, if they were paid for or not, and if the post were being sponsored by an outside entity so that consumers could better discern what the "truth" might be in how products were presented. Too many scammers were forcing something to be done.

Consumers were sometimes duped into believing that certain products were legit, when in fact bloggers/online media folk were being paid to say whatever it took to foist product onto unsuspecting consumers. (Interestingly, the current craze of "internet influencers" on Instagram and YouTube are doing the same/similar things now.)

So, I adopted a disclaimer which I started using back then, and still do to this day that reads something like this: (This - again- is an example of The Standard Disclaimer)

Notice: XYZ Company sent over its Widget for test and review to Riding Gravel at no charge. We are not being paid, nor bribed, for this review, and we always strive to give our honest thoughts and views throughout.*

Now for years I kept the Guitar Ted Productions side of things out of the reviewing side, but it crept in anyway, and what is more, I have been using stuff I got out of doing reviews for years and showing it here on GTP. So, I thought I'd best be pointing that all out.

Not because I have had requests to do that from anyone. No- I just think it is best to be open and up front about these things. So, whenever I mention the "Standard Disclaimer" on the blog now- this is what I am referring to.

*I will always be frank and honest about products I have received for testing and reviewing that were not requested back, or in terms of gifts, I also will be up front about those things as well. So, you, the reader, can always understand where I stand with regard to what I use, and make better, more informed decisions. The "Standard Disclaimer" when referenced, is this disclaimer in italics above, with the exception that whatever I am reviewing or using can be inserted where "XYZ Company"  and where "Widget"is in the text. 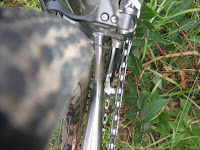 A Quick Note On The Phrase, "NOTE: Large doses of "my opinion" will be handed out in gloppy dollops today. You've been forewarned....."  which appears before some of my rants, opinions, and thoughts on certain topics:

Back in 2012 I wrote a very critical post about the then new Salsa Warbird Titanium bike. (See it here) After I posted it, certain Salsa and QBP employees at the time took umbrage with me in terms of certain phrases I used, and how I presented the bike in that post. We agreed, in the end, to disagree on those points and I offered to put a 'disclaimer' on the post saying it - in effect- was one man's opinion, not necessarily what everyone thought.

So, being the somewhat smarty-pants guy that I am at times, I put that disclaimer, as you see it, ahead of the post. I thought I was being honest and fair with my criticisms and that the Salsa/QBP folk were just being a bit overly-sensitive about the shortcomings - as I saw them- of that particular bike. Well, subsequently history has shown that perhaps I was on the right track there.....

Anyway, there is a bit of the backstory on that, in case you were wondering.

Any questions, comments, or concerns? Hit me up at g.ted.productions@gmail.com

And as always- Thank you for reading!