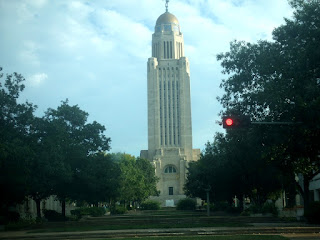 My story began on Friday when Mike Johnson stopped to pick me and my gear up to go to Lincoln, Nebraska for the Good Life Gravel Adventure/Gravel World Championships. The trip down was marked by no noteworthy thing, other than it rained.
Hard.
Again.
In Iowa.

Oh well! It hadn't rained much at all in the Lincoln area, and if not for a few mere tenths of an inch the day before, the dust would have been really bad on the day of the event, but I am getting ahead of myself..... 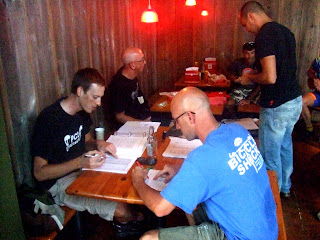 The event kicked off with an optional pre-race check in at Oso's Burritos on "O" Street in downtown Lincoln. Corey "Cornbread" Godfrey was there with his volunteers getting us dialed in with waivers and souvenirs. (I got a rockin' one-in-50 print commemorating the Gravel Worlds for a song, and a pink PCL t-shirt. Oh yeah!)

We re-connected with gravel aficionados from all across the Mid-West and had an excellent Oso's burrito. I recommend you stop there if ever you find yourself in downtown Lincoln. 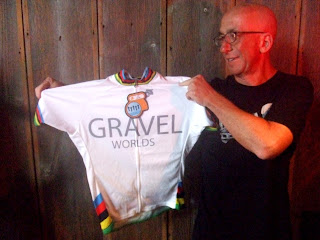 Did I mention that the Pirate Cycling League puts all this on for free with huge support from the Lincoln cycling culture? Oh yeah! They even had these sweet World Champ jerseys ready to go for all category winners. Gotta love the passion for cycling that the Lincoln Crew has.

After the grub and meet-up, we went to the D-Street Hotel, (which is really just a big ol' house that has been the epi-center of Lincoln cycling culture for years), and hung out. The highlight for me was to finally meet "CVO", (a real person, by the way, and not an enigma), and to hang out once more at the D-Street. (Thanks for the hospitality, ya'all!) Then it was off to the Star City Inn for a good nights' rest, because wake up call was set for 4am. The start of the event was set for 6am, and we were going to ride the two miles down to the Lancaster Event Center where the start finish line was set to be. 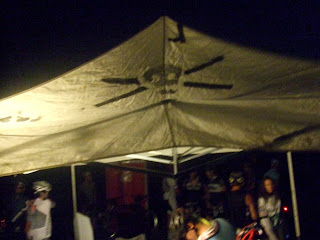 <===Under The Banner Of The Pirate Cycling League!


We awoke on time and actually were so efficient we had a few minutes to sit around before having to ride about two miles to the site of the start. When we got to the Lancaster Event Center, we wended our way around until we spied the lone PCL tent and a couple of LED blinkies, which indicated something cycling related going on. We pulled up to be greeted by a smiling Cornbread, who just came off celebrating his birthday that evening. He had CVO and a couple of other guys helping out with check in and numbering the riders, which was performed by CVO by writing the number on our left calf with a magic marker. That felt kinda weird, but it worked. 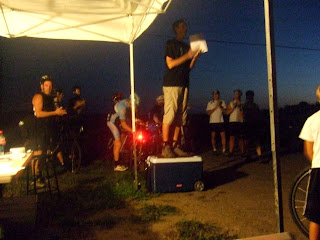 <==Cornbread giving the final instructions to the assembled riders.


Soon several riders and cars were appearing. The PCL tent got really busy. Too bad the people didn't take the cue and show up at Oso's the night before. (Note: That's why I require riders come to the T.I. pre-race meeting!) Through it all Cornbread, CVO, and the gang were courteous, calm, and cheerful. Another plus to the Lincoln cycling scene: Cool headed folks that are super helpful. It was awesome to witness.

But due to the human nature of "waiting until the last minute", this "bum rush" at the end of the night made the race start become delayed a bit. I didn't hear any complaints about this, but I would hope that folks would be a bit more conscientious towards guys putting on a free event and make it easier on them by showing up early. 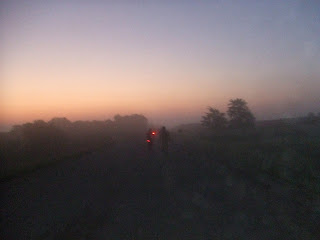 At the end of it all, the event did get underway, albeit a tad later than originally planned. 96 "official" riders took the start along with several that would just be riding along for fun to add up to an undetermined number of cyclists which took off  into the gathering fog and sunlight.

The beginnings of the event were smooth, flat, and comfortable, for me anyway. It was drippy-foggy-muggy, but it was okay with me. I was feeling good and was rolling along just fine.

Mark, great having you there man. It meant a lot to the Lincoln cycling crew to have you line up on Saturday morning. Hope you "enjoyed" the ride. :) Troy really put together a tough one this year.

Take care and we'll see ya soon I'm sure!

@Cornbread: Note: Never, ever have a previous winner of the GLGA design a course for the following year! (Ha! Just kidding!)

Thanks to you and everyone involved in the GLGA/Gravel Worlds, and to all the Lincoln cycling freaks that I have had the pleasure to meet. My life is better for meeting ya'all.

The least I could do is to come and support what you do.

It's a worth a trip to Lincoln just to SEE CVO, he does sooo much to promote the "scene" in Lincoln! Looks like another GREAT time that I missed out on, oh well, there's still cross season, & my son is ready to hit them up again.