Paint Us Black: I've come across a couple troubling media stories concerning cyclists of late. Some "headlines" of sorts, that make me feel a bit concerned.

First off, I want to point out that as citizens out there we continue to pursue "getting our zoom on". Trying to cram everything we can in our craniums that is available. We seem to be fearing being "left out", "left behind", and possibly being accused of being "on the right or the left" of any issue. Instead of soaking in the whole story, or (GASP!), actually comprehending what we've read, we tend to skip over the headlines, looking for that real juicy bit we can lay on our colleagues at lunch. You know, you just regurgitate the headline, and suddenly you've started a conversation about something. This is making you feel important, like you've actually read the entire article, (when you haven't), and your colleagues think you're cool. (C'mon! We've all done this a bit at one time or another)

So, these derogatory headlines about cyclists. They are not good, because really- most folks will rarely read the entire article.

Just yesterday, I was pointed to this article from a Philedelphia news source that had the following headline and sub-title:

And this isn't limited to news print media either. Recently I read about two radio disc jockeys that announced a program saying they were going to discuss "these cyclists who are like a religious cult".
Seems like since "cyclists" are not of one certain race, creed, or color, that it is okay to denigrate them upfront. I mean, they are open game to be ridiculed, and who wouldn't agree? They are just a bunch of weirdos anyway, and the reading and listening public will eat this up. (You know- ratings, sales, numbers. The Boss just loves that stuff when they go up)

To be fair, and to further illustrate my point, the author of the Philly based piece actually had a great point about cyclists not obeying the rules of the road. A point we as cyclists should all take to heart. But the author didn't get to that good point until well after halfway through the article, and not until the author had fully pushed all the "hate cyclists" buttons that could be pushed. Nice. Hope the efforts gained you some nice sales of that rag. (NOT!) 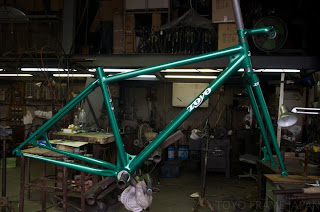 Master Frame Builder Ishigaki-san started the Toyo Frame Company in Japan in the 1970's The factory went on to produce some classic BMX bicycles and mountain bikes early on, and also does work for Rivendell Bikes. If you've got time to slow down and read something, (hint!), check out this story on the Frame Builder's Forum about Ishigaki-san and Toyo.

I was pointed to Toyo's Facebook page and saw this awesome, beautiful rigid 29"er that happens to be joined in my favorite technique, (fillet brazed), and in one of my all-time favorite colors. You should go through the Facebook album of this bike, where detailed photos show the bare frame, and you really get a sense of the skill and efforts that went into this beauty of a 29"er.

Now, I'm not one to get all wobbly-kneed about the "artistry" that many frame builders claim to have, because many are just fancy paint jobs over "good work", not necessarily "art". However; I do think that it can happen where "art" and a bicycle frame come together, and this one is a fine example. Maybe the most outstanding fillet brazed bike frame I've been made aware of. Enjoy!

Thanks to those who responded to the Death Ride Cookie Count. There is still time to get on board with us for the Guitar Ted Death Ride Invitational. The ride is on July 30th, and should start about 6am. Hit the link for details, but if you decide you are coming, please leave a comment here saying so, and I'll add you to the "Death Ride Cookie Count". (Gotta have yer munchies!)

Also, the GTDRI site has a link in the right hand margin for the 2011 Cues. If you are coming, get these printed off if you want cues. I won't be bringing extras! Once again, we'll be heading out of Hickory Hills County Park in Tama County.

Mark,
I will be there. Save me some cookies.