This time of the year is sort of weird in my mind. The difference between Spring riding and Summer riding here is pretty radical when you think about it. Early Spring brings dry, cool air, but wetter trails. Summer time brings wet, humid air, and rock hard, dry, and fast trails. 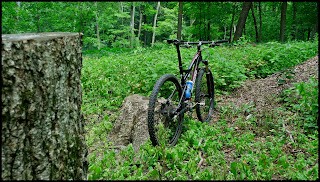 It's as about as green as it gets out there now, but it is also about as dry as the trails ever get too. The two things are rare together.

I was up at the Camp's South side to test out the Velocity wheels. There was a rare sight in the primitive lot when I got there. A Toyota truck was sitting there with its end gate down. Hmm..... someone else to watch for, for once. Then, something even odder happened.

Another Toyota pulled up, and it was a guy I knew. Eric has come into the shop a few times, and he was all ready to go riding. So, now I had someone else to ride with! We took off and soon were blazing down the single track. The dry conditions were just right for great traction.

The trails were super clean, weeded by chemicals, (by the looks of it), and cleared of any dead falls in preparation for the upcoming race on July 31st. If the trails stay this way, they are going to be really, really fast. Eric and I were able to go as fast as we dared ourselves to go, and having him there encouraged me to push it harder than I would have. It was good for me, and good for finding out a few things about the Velocity wheels.

Oh, and that other rider? Didn't know who he was, but I ran across him after Eric and I got a lap in, and he went on, while I went in for some images. Well, whoever it was, it was great to see more folks out there enjoying the trails.
Posted by Guitar Ted at 1:00 AM

Good Ride GT. Even though I did crash I still had a great time. Trails are very fast right now.