Yes readers- it is that time again. The annual year end review.

2012 started off with the continuing "non-winter" conditions that allowed for a glorious day of Trans Iowa V8 recon in Southern Iowa. It was a huge break to be able to get away and have gotten almost the entire recon done after an initial 170 miles had been knocked out previously in Fall of 2011. I found all but about the last 20 or so miles of the course that day, and then was able to move on to doing cue sheets.

The next big deal for me was doing the Triple D Winter Race, (which I am scheduled to do again next month.) I was wondering if I would be taking a mountain bike, but a few days before the event, Winter actually showed up and dumped out a fair amount of snow, which made the course a true winter course. I went with By-Tor, the Titanium Mukluk, and scored a finish at 22nd place. It was a great learning experience and I am looking forward to this next one.

Then the annual Frostbike trip happened again. I went to Northfield, Minnesota, hooked up with Ben and other regular characters, and went back to do some hot laps inside of Mike's Bikes. Frostbike itself was a good event, as always, and it was fantastic to hang with old friends and new at the show.

Later in the month of February I was scheduled to attend CIRREM and try my hand at that event again. Unfortunately, circumstances prevented my getting there and riding. That was a bit of a bummer. Winter had started to fade in a big hurry by this time and sloppy, wet conditions prevailed. I still got in several wet, mushy fat bike rides and started to ride some gravel by early March. 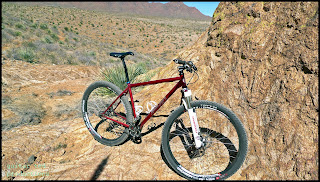 Then it was off to El Paso, Texas again where I visited family and rode some killer off road trails in the Chihuahuan Desert at Franklin Mountain State Park.

The desert is an awesome place to ride, and it didn't disappoint, but the best was the last ride where I took a look at the East side of the mountain where I had never ridden before. It was an eye opener! The trails over there are so much more flowy, and burned in much better than the West side trails are.

The weather was perfect, until our last full day there when we experienced a full on dust storm, which is not unlike a blizzard in Iowa, only warmer, with sand!

March then closed out with a full recon of Trans Iowa V8's course by the cue sheet drafts. We found a few mistakes, and one closed down section of road! I came back with some minor work to get the cues straightened out, but then got squared away with near perfect cues for the event. Printing ensued, and by mid-April cue sheets were all done and ready to go. 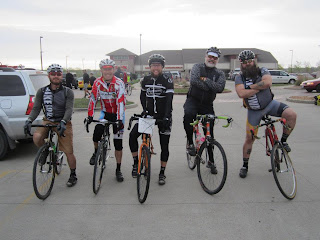 Then with all the Trans Iowa preparations going on, I took some time out to do what has become one of my favorite events I've taken part in, The Renegade Gents Race.

It's a different gravel grinder in that you compete on a team of five riders. All riders must start, go through a checkpoint, and finish together, team time trial style. Teams are handicapped based on the promoters decision on who has the weakest team. Slower teams go first, final starters are the fast guys. I think there were 29 teams in 2012's running of this event!

It was a lot of fun to get hooked up with the same four guys as last year, and just as we were about to head out, we got a full on dump of heavy rain to ride into. That cleared up after a bit, but it was a soggy, gray, chunky, windy event. Still, we all had a lot of fun, and I think we didn't do too badly. At least we beat the fat bike team!

Funny, but I think that was the last major rain before Trans Iowa V8, which had 67 starters this year. The event was marked by bookends of rain and a heavy East wind. Fresh gravel at the end, and a surprise B Road played hell with a few of the riders, but the event saw 19 finishers and a few came in outside the time limit as well. Commentary post race was very positive, and as you all know by now, T.I.V9 is set to happen again next April.

That takes us to the end of the first third of 2012 when I started doing the weekly 3GR. Summer came, it got hot. Gravel and dirt was ridden, and more. Stay tuned....
Posted by Guitar Ted at 1:30 AM

This view is completely familiar now, but in '09 it was new and exciting. "Trans Iowa Stories" is an every Sunday post whi...