In mid-November, the idea of Trans Iowa was hatched. The year was 2004. In the ten years since then there have been many stories and memories. These posts will tell of the most prominent ones to my mind. Maybe I'll even spill the beans on some things you never knew....

The run up to the second Trans Iowa was exciting and stressful. I was worried that things wouldn't go so well. Not because we hadn't done our due diligence, but I suppose it was a feeling of responsibility to put on a good event. Looking back, I was pretty amped.

The other thing that was imminently obvious going in was that the race day was going to be wet, windy, and cold. It started raining Thursday and it never really quit all through the weekend. Jeff and I were ready to see a crazy, epic struggle against the course and the weather. Jeff was in pretty high spirits and didn't seem too worried, so I took that as a cue to relax a bit. However; all week leading up to the event I was sure it was going to be another low count for finishers while others were saying a full one third of the starters would cross the line in Decorah on Sunday.

Going out on Friday to Hawarden was a fun trip, as I recall. We stopped at some Walmart and I bought an 18 pack box of Red Bull to keep me awake during the weekend. Jeff got some typical endurance racer grub and we headed out to stop and check on some of the B Maintenance roads we had on the course. What we found was dirt swimming in water. But that was only one major blow we were aware of. There was something else we hadn't considered, or even knew about.That being saturated gravel. It was like riding on a beach soaked in water.

But first we had a lot to do to get ready. We made it to Hawarden and made contact with our host family where we were to spend the night. We then hit the Pizza Ranch to set up shop in their party room. There we met an amiable fellow by the name of Dave Nice. He had come out from Colorado to ride in T.I.V2. He even offered to help us with stuffing the race bags! I thought this was awesome, and the theme of meeting really great people did not cease the entire weekend.

The racers filed in and amongst that years "big names" were the LaLonde brothers, Mark and Jesse. When we did the racer call up to get the bags, Jesse was called up first. He whispered to me that when we called up Mark, to use the name "The Darkness", because he'd really like that. So, that's what I did. It was a bit awkward, but he did actually really appreciate that!

The pre-race meeting went great, we had a good turnout despite the bad weather predictions. We did have a good amount of "no-shows" though, and while it has been a long time ago, I want to say the number was around 20 folks. It was something I filed away in my mind and wanted to think about later, but at the time we weren't too surprised that we didn't see some folks show up. With everything wrapped up at the Pizza Ranch, it was time to head to our host home for a few hours of restless sleep. 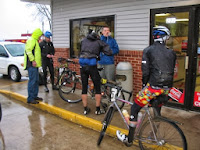 It was the first year of several to follow where I would wake up early and head out to a chilly, dark start to a Trans Iowa as we had moved the start back to 4am. The event took on a new feel due to this as we witnessed the long stream of flashers and head lamps when the horn was tooted at the beginning. It was wet, a bit windy, but hopes were high that dark April morning.

Of course, Trans Iowa V2 has become sort of a byword in the history of the event, and those that were in it still tell me they will likely never forget it. Most of the field had stopped by 40 miles or so into it. There was a smaller group that soldiered onward, and for a time we thought that maybe the predicted 5-12 riders would somehow make the 6:00pm cut off in Algona, but it became apparent by about 70 miles in that this would not be the case. An impromptu gathering under the new canopies in the park in Algona was arranged for, and as several riders stopped by to pick up unused drop bags, a bit of a beer party broke out. It was a fun, social end to a miserable, muddy, rainy day.

Jeff and I were home by nightfall that day. I felt I had not finished the job I had gone out to do. Trans Iowa became a bit of a legend in endurance circles as the event you couldn't finish, it was so tough. Only 9 people had ever done it. In a way, that was kind of a good thing, but in another way, it was a big concern of mine. At the time, I was just glad I had gotten home without some angry bicycle rider punching me out for such a miserable, tough course!

What amazed me at the time was seeing the photos of riders on road bikes with slicks. I guess that was one way of having the gravel just slide off your tires!!
Ari

@Ari: The tracks you see in the gravel in the first image of the post were left by such tires. Rusty Kay was riding 28mm tires on a road bike that year, as I recall. It was a really crazy year for different bike set ups.

I still have memories of falling in love with gravel racing when that picture of a surly crosscheck or steamroller with the Carpet top tube protector was caught by my eyes. That pretty much eliminated all my love for the road bike.
Ari