The checking of the route. It has to be done, or you just cannot know for sure if what you have chosen from maps, gps programs, etc, really exists. It is almost 2014, yet nothing works better than actually going out and physically checking the lay of the land. This particular trip on Saturday, with my friend and assistant, Jeremy, was a textbook example of why this is so.

Things started out well enough. We met at 6:00am and left for the starting point in front of Bikes To You in Grinnell, Iowa. But first, breakfast! We found and excellent value on grub at the Frontier, a fine, clean cafe with extra-fast, courteous service. Highly recommended if you ever get to Grinnell! After we had our fill, we hit the trail for Trans Iowa V10.

Conditions were really good too. We had clear blue sky, bright sunshine, and cold temperatures along with some wind. It couldn't have been better for doing things like driving down sketchy B Maintenance roads, which we we found ourselves doing not long after leaving town. Out of the several choices for B roads we had, we picked a doozy too. It even included a bit of a performance by a four legged creature which bounded over some collapsed fence lines just as we were about to pass. We stopped and watched until the coast was clear, then we moved along. After our passage, we motored onward toward Checkpoint #1 on dusty, hilly roads.

The road to Checkpoint #1 was pretty uneventful. We checked out the small town for a good spot to set up for the checking in of riders and found the local convenience store. Then we moved on to uncharted, (for Trans Iowa), territories. Now the route through here had already been modified digitally a couple of times, but it still needed tweaking. We just didn't know that until we arrived at the unknown, (to us), spot. The road was a through road on every map you can look up on line, including the State of Iowa D.O.T. map which had been updated in January of 2013. But, a lot can happen in ten months!

When we did arrive at this certain spot, it required an entire redrawing of the route as it had been planned. No problem though, as we found an excellent route around the area although it added a few extra miles. I still am a bit concerned about this area if we get extensive moisture and rain throughout the Winter and early Spring. That won't be a big deal if we stay dry though.

Okay, so we finally get around this spot and back on track with the preplanned route. Things are looking pretty good, and then there is THAT sign again. Meh! Another bridge out, but once again, a road that was shown as a through road even on the latest maps I can get. You just can not trust a map! Not 100%. Not ever, and it is why you have to do your recon. It takes time, and it is a pain in the butt sometimes, but it is the right thing to do. And I'll have to do recon again just before Trans Iowa for the same reasons because by then, things may change again! It's happened before and when it did, it caused a huge uproar with the event, which you can see on "300 Miles of Gravel."

Anywho.....here we were, checking out the map for a suitable reroute, and we found one, only thing was, it had a B Maintenance road option, which we ended up using. It is a pretty dang cool road, so I think we'll be okay. It's a well traveled B Road, and it has a unique feature as well. Should be pretty cool.

Once again.....we finally get back on the route! The preplanned one, at any rate, and we get on with recon activity. Things are progressing toward Checkpoint #2 and along about halfway over there, we have a left turn to take and we see that sign again!

Again?!!! Yes, again, so we stop, get out the maps, and once again  we start plotting a new course. The reason? Yep! Bridge out again! And oddly enough, it probably had been out for a long time, but the map folks, (even the State DOT), has yet to catch up to this. It probably is not important at all, since, you know, it isn't an important road at all, unless it is for Trans Iowa!

Well, we decided to move on with an impromptu recourse we thought would be good, and actually, it was way better than what we I planned on anyway. Curvy, tree lined, and interesting. Around the horn and back into our intended loop, and a big natural road block that I had found a way around worked out well. Good thing too, because there was no rerouting around this!

We went onward and one of the main themes of the day was all the harvesting we were witnessing. Farmers with big semi-tractor trailer set ups, big tractors and wagons, and combines were everywhere. It was cool to witness the harvest coming in. I have a lot of harvesting related images I will post later. 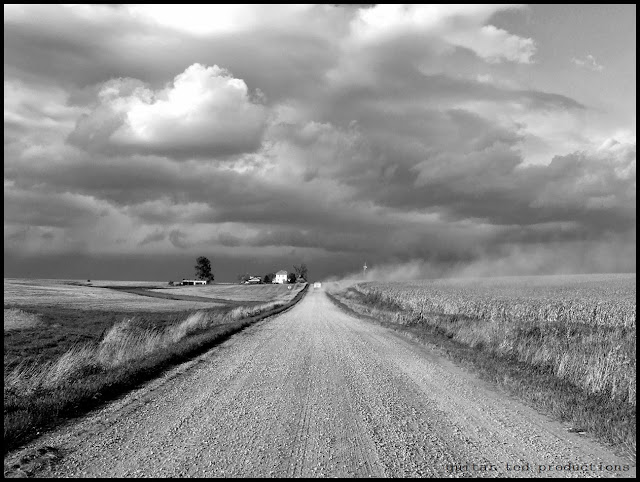 Then it started to sprinkle, which was no big deal. Then it became an outright rain. Okay.....now I was getting a bit concerned. I had a steep, longish B Road section in mind, and up to that point, it had been so dry that we were kicking up loads of dust with our passing. However; an outright rain might turn the clayish road to a slippery surface that I would get stuck in, or worse, lose control on and go into the ditch. I was wanting to get to this section before that might happen, but it looked to me as though it might be touch and go. Jeremy wasn't so sure. He felt as though the long, dry spell would allow the soil to accept a lot of moisture before we would have an issue.

In the end, Jeremy was right, and the clay was actually pretty tacky. Like a racing track, it had taken on the right amount of moisture to have the best possible traction. Which I appreciated as I leaned on the brake pedal hard as we descended into the valley and also as I hit the accelerator hard going back up the other side. 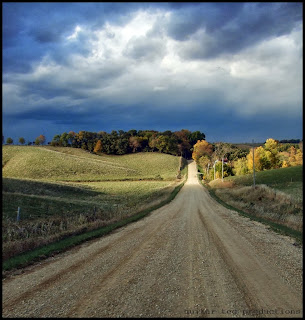 With that crisis averted we got on to looking over our Checkpoint #2 spot, which was about 175.8 miles into the day's course recon. After a quick approval we were moving again towards a bit of a flatter section of the course that was actually quite mind numbing for Jeremy and I.

The rain dissipated and the Sun was breaking out here and there which was making Jeremy and I glad. Soon we were back to enjoying the course again and basking in the late Fall Sun while the hills and miles whiled our time away.

While all the roads we wanted to use were actually there, we still were not done with rerouting. I had a revelation about the course when I was in bed Saturday night and had decided to change things up. Jeremy was all for it once I explained the route and was set off on our new course. All of this rerouting was not without its consequences. The going around, the extra miles it was piling on, and my new off course shenanigans were going to push Trans Iowa V10's mileage way over what would be reasonable.

It was then decided we would stop at an agreed upon place leaving about 75 miles that could be "used up" to get to what Trans Iowa should be run at, which I believe is around 310-330 miles total. The last bits we reconned were what I had anticipated and were driven in some fantastic light for photography. I got some nice images with my old, beat up Fuji. So, you know if my images are half way decent, the light was killer. A "real photographer" would have gotten some really great images.

Damn, this gets the wheels turning. As a TIV5 finisher and a DNF in TIV6, V10 looks like a good year to toe the line.