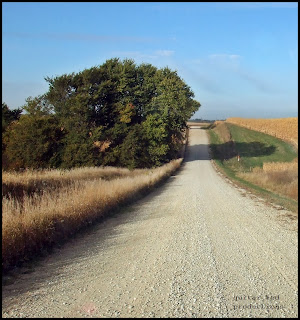 Last week's recon mission with Jeremy of the Trans Iowa V10 course was a big step forward in getting the major work done for the event's course planning. However; with our forced re-routes, which added unplanned for mileage, it became apparent very quickly to me that a revision was going to be necessary.

Instead of scrapping what we had, I made a decision on the road to add a section I had in mind anyway, and then to quit for the day so I could regroup and come up with a different ending. Well, I have done that, and barring any more road blocks in our way, I think this will be pretty close to what the course will be for the April running of Trans Iowa.

The big problem with this year's course, (as it was with last year's and some years previous), is finding convenience stores that would be open all night, or a convenience store on the route at all. However; I have worked it out where resupply options will be possible at regular intervals. The longest space between stores, at least theoretically, is 70 miles. But hold on......it may not actually pan out that way in reality.

If you were in last year's event, you will know what I am driving at already. If you were not, here's the deal: Convenience stores typically close up shop by 11:00pm on a weekend night. Most do not open until 6:00am Sunday mornings. So, if you were to hit a convenience store opportunity at, say 11:20pm, you would be out of luck. It may have been 70 miles since your last stop and it may be 50 to 70 more until you pass another.

It is theoretically possible, given the distances between opportunities on this course and timing of your arrival that you could get into a situation where you may have to go 150 plus miles without a resupply. Now, I doubt that will happen. But you never know, do you? I figured last year most folks wouldn't get to Brooklyn before that convenience store opened, and look what happened! The event went at a record pace so far into it that many in the event blew by Brooklyn in the middle of the night, just when that store was closed. The leaders missed making it before it closed by about an hour and a half, and most of the field that finished had gone by before it reopened at 6am. Crazy!

So, this year you could find yourself in a similar pickle. Just don't say I didn't warn ya!
Posted by Guitar Ted at 1:30 AM