The Story Of Guitar Ted: Working For The Dark Side- Part 2

Welcome to a brand new series on G-Ted Productions! This series will jump off from the time where the "Race Against Death Tour" ended and will take you up to the beginnings of Trans Iowa in late 2004. This is an eight year period where my life was transformed. You could say it was metamorphosed from the old to something quite new.

This won't have a lot of bicycle stuff in it at times, but it is all essential to the story of "Guitar Ted". This isn't about where the name came from. That's all here.  No, this is about the person.

As with previous historical series on the blog, images will be a rarity. Cell phones, social media, and digital images were not available to take advantage of in those last days of analog living.

Remember that 1991 Honda Accord Station Wagon I mentioned last week? Well, in a twist of fate, I ended up owning that car. It was a big deal at the time which helped to change my life. Here's how.....
As you may recall, I started working at Schuerman's in February of 1997. I had to drive all the way across town to get there, and the quickest way was by using the "expressway", which was Highway 218/27 for the most part, until I got into Cedar Falls. This highway had several raised portions and bridges over the Cedar River and Black Hawk Creek. In March, on a Friday morning, I got into my 1989 Dodge Dakota 4X4 convertible truck, (Yes- a rag top pick-up), and I started driving to work. It was raining, and the temperature was about at freezing.

As I entered the expressway on a ramp, which then dumped out immediately onto the bridge across Black Hawk Creek, I lost control as the bridge deck was sheer ice. I remember trying to steer the truck and nothing happened, I was headed for a cement retaining wall at 50+ mph. Right across the path of speeding traffic! 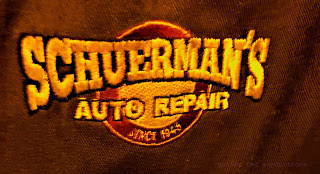 Miraculously, I did not hit anyone, but when the truck hit the wall at that angle, it lifted up, pivoted on the nose, spun around, and the tail end hit the wall which then pushed me back across the roadway in front of more cars. Again- I didn't hit anyone else! But I did hit the opposite side of the bridge with the other corner of the front end, effectively giving the truck a pointed front! I was unhurt.

Anyway, a bunch more cars crashed, Eric saw me on his way to work and said he'd tell "Sherm", (as we called Jim), that I was going to be late, and I ended up coming in three hours late or something. Eric gave me a ride home, as he lived in Washburn, which caused him to go by where I lived. Oddly enough, Jim got into an accident going home when a young lady lost control on the still icy roads and creamed his Toyota T-1000 truck. Jim always referred to that day as "Black Friday" afterward.

Well, the whole point here was that Eric wasn't going to get me everyday, and I needed a vehicle. It just so happened that the 1991 Honda Accord wagon was for sale with 14,000 original miles. I secured a loan, and got that car. The truck? Totalled. The last time I saw it was when it was at the tow truck station.

It all seemed too good to be true, considering that had I not been hired at Schuerman's only four weeks earlier, I would have been stuck in that 1989 Dakota rag top for years, and honestly, it wasn't a very good vehicle by this point. I had been in two accidents with it by the time I got to Schuerman's, the most recent one being the third and final one. The transfer case had crapped out on me and I had to get it replaced shortly before I got hired at Sherm's.. So, it had it's issues and likely would have had more since it was going on 8 years old by that time. The Accord wagon was 2 years newer and essentially "NOS", with only 14,000 miles on the odometer. Heck, it still smelled new inside! The big thing here was that the Honda became a bike hauling rig, and I'll get into that in my next post.

Next: Staying In Touch

Labels: The Story Of Guitar Ted