That's from my buddy John G up in the Twin Cities area. He's quite the trials rider, and he works at QBP, so this is a Surly sponsored gig of sorts. By the way, the rock pile he is working around in the short clip there is the one and the same that I went and checked out last Labor Day weekend with Ben Witt and Curtis the Wrench.

I guess I'll have to keep my eyes peeled for the full version of this fat bike trials clip to come soon.

Trans Iowa On The Brain:
Yep. That's the way it goes for me at this time of the year. I think about this maybe more than anything in the final days leading up to this event.

So, here's how things are shaping up. The Pre-Race Meat-Up is almost all figured out. I have to forward the final numbers and menu selections in this weekend and that's that for the preliminary stuff on that end. I've got final cue sheets ready to go to print, but I'm holding off a bit to get a feel for where the roster numbers are going, so I don't print off too many useless sets.

Speaking of that, the numbers are looking to go to a "more traditional level" than I had once thought. Last year there was a record number of starters at 76 riders. This year looked to be going great for numbers, as I had over 90 yet on the roster up until about a month ago. But since then, the attrition has set in, and now we're right at 77 overall, which will definitely sink lower. I always get a few no shows, last year I think it was five. So, you have to figure with a couple weeks to go and with the average number of no-shows thrown in, we'll be down around what we had start back in the T.I.V5 days. Probably in the 60-ish level, I would guess. 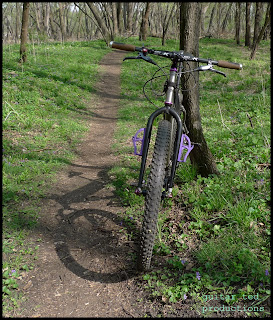 I have been riding By-Tor The Titanium Mukluk some more with these Handspun fat bike hubbed, 29"er rimmed wheels. One thing about the wheels I didn't mention previously was how super-laterally stiff they feel.

Those wider flanged, dishless wheels are a major difference in the way this bike rides compared to other 29"ers. Probably only my Enve carbon rimmed wheels can come close.

I had ridden Ben Witt's Potts 29"er with a fat front fork and a wheel made with a Paul WHub laced to a Crest rim, which I would not think would be a good match for a guy my size, but with the dishless front, the Crest was "okay". This Mukluk has a Stan's Flow on it, so it feels rock solid. Even the rear wheel is stable as all get-out.

I know that back in the day, Charlie Cunningham and WTB were really pushing for dishless mtb wheels. Now I know why. I think it makes a ton of sense, and I am glad I have these wheels to thrash on for a while. If you have a fat bike, this is something that maybe you should look into. I was amazed at the difference compared to my other 29"ers.

And there you have my Randomonium for Thursday. Have a good one folks!

So GT, I've been wondering about how much of a difference these 29er wheelsets would make on my Muk. I did the DK Lite today (20 miler) on it today and was fine until I had to start climbing some steep hills. About did me in! ;). It left me wondering if I should get another bike to go along with the Muk, or get a different wheelset. Do you have a guesstimate as to how much rotating mass is cut down and what the overall weight savings would be.

@chromehorn: Well, just look at the tires, for instance. Larry 3.8"ers are in the 14-1600 gram range depending on the specific model. That's just ONE tire. Now I have Bontrager 29-4's on which weigh about the same for the PAIR. Plus- I am running the Bontragers tubeless. Big, big difference right there.

Now as for the wheels- Surprisingly there isn't as huge a difference there, but the 29"er wheels are also lighter for the set.

I can say with my experience the 29"er wheel set is what I would have raced on my Mukluk at the DK200. If I had gone this year, that was my bike of choice. No way would I have ever raced fat bike wheels there.

There is a certain romanticism, tough guy, "I'm different" element to doing fat bikes in these gravel events, but they are not helping you out in 95% of the situations they are being used in as far as gravel events go.

Yes- sometimes they can be an advantage, and I can think of some events/situations where that has happened, but DK200 is not one of them.