3:00am Saturday, April 27th, 2013: I thought I faintly heard someone moving around outside the bedroom door in the loft apartment above Bikes To You. I look at my iPhone to get the time. Hrummph! May as well get going.....

I slip into my clothes for the day and lace my shoes to my feet. I wouldn't be taking them off again until late Sunday. That's kind of weird when you think about that......

I step outside of the small bedroom to find Craig Cooper, owner of the loft apartment and Bikes To You, getting kitted up for a casual gravel grinder that would be following our tracks for T.I.V9's first leg to Ira, Iowa. "Track chasing", Craig called it, and it was just for fun. He mentioned something about his "...damned internal alarm clock!", when I said my alarm hadn't gone off either. I guess we were both nervous and excited, although I think I slept better than I ever have before a Trans Iowa.

And why shouldn't I have? The weather was a "non-factor" going in, and everyone knew that it would be, so there was an unusual air of excitement tempered by anxiety in the air as riders casually meandered about the darkened streets of Grinnell. I also knew there were no loose ends. The course was as dialed as I could get it, the cues were as exact as humanly possible, and I was armed with 8 prior Trans Iowa experiences to draw from if necessary. That isn't to say that things couldn't have gone pear shaped, but I felt more confident than I had in years.

The start was going to be a longer drawn out affair due to the length of Grinnell. There would be a police blockade of Highway 146 too, so we had that advantage. I tooted the horn and the start was off and rolling. I felt oddly calm, and as I steadied the truck at around 12-15 mile per hour, I could hear the front row of racers start to chatter with each other. It was fun to eaves drop on the conversations!

The Grinnell Police had their cars in place and I hesitated to see if I would get the high sign to roll on through, and when I did, a cheer broke out along the roadside as there were several fans and supporters shouting encouragements to the long line of LED clad riders.  I gunned the throttle and sped over the first big roller. I remember saying out loud, "Well, here we go!", as I took a traditional quick glance backward to see the spectacular show and then they disappeared from my sight. I drove hard through a left hand turn onto 20th and the engine roared as I sped off into the moonlit night. Of course, I didn't really need to drive the course to check this part, and I didn't need cue sheets. I know this area well by now, but I had promised Rob V, who hooked me up with the Barn for the finish line festivities, a set of cues to guide his gravel ride later that morning. My plan was to drop them in the mail box as I went by the Barn where he was staying. 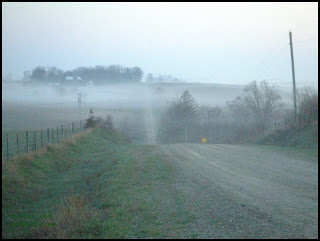 I meandered along, in no particular hurry, as the dark slowly faded to a ghostly haze. I saw in the slowly revealed landscape that a fog was blanketing the land and the overwhelming sense of peace was thick in the air. There was no wind, song birds were punctuating the dream-scape with their warbling, and the sand paper sound of my tires on the roadway were all I was sensing. Then as more light was added I could sense myself losing track of Trans Iowa altogether. I was almost in a state of not caring at all as I stopped up on E 84th Street N and just soaked it all in.

It was kind of odd, and I was remarking to myself that I had better be on the look out for riders, but something was not letting me go just yet. I stuck around a few more minutes not doing anything but being. It was a special little Trans Iowa moment, and maybe it doesn't mean a thing to you, dear readers, but for me it was remarkable and shocking, really. Of course, I finally snapped to and got rolling again.

It wasn't long before I rolled up on Jason and Wally with George in tow. They were the photography crew for the event, and they were scouting places to get the good stuff, monstrous lenses in tow. Wally told me he already had hundreds of images and it was only 5:30am! I think Jason had as many or more. I chatted them up for a bit and then moved along back into the fog. 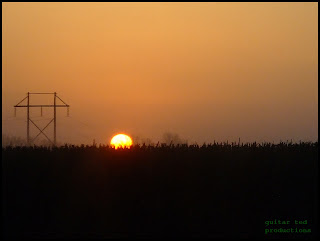 The ethereal start to Trans Iowa V9 was beautiful, peaceful, and it really hit me that I was super blessed to be doing what I was doing. Words are hard to write about this experience, but there it is.....

And of course, the sun came up and the world changed again. It marked a new beginning, as sunrises often do, and new chances were there for the taking. I had to get to Ira and check on my volunteers. They were all there, of course, and ready to go. It was cold, and we were all cheered by the prospects of so many riders being able to take those new chances the day presented and see what they could do with them. I stamped my feet to keep them warm. Suddenly, I saw three riders blazing up the bike path toward us. Riders Up!

Eric Brunt with two in tow. They were in such a rush I never did figure out who the other two were. All three were breathing heavily, gassed. I suspected they were riding on the rivet for miles. The chaos of their arrival and gasping for air was in stark contrast to the peace and dreaminess of the previous three hours and eleven minutes. Brunt clipped in and sped away, the other two gasping and straining at the pedals to keep his wheel. All heads were down, and right on their heels comes Dennis Grelk, Rich Wince, and Chris Schotz a hair back. I turned my attention to them briefly when I and the others realized the Brunt group had steamed up the bike path instead of turning left up the road and out of town. Everyone yelled, screamed, and even whistled shrilly to get their attention, to no avail. They disappeared around the bend!

I turned around and looked at Dennis Grelk. He clipped in, and with a mighty stroke at the pedal he quipped, "That's classic!", and turned left with Rich and Chris following his wheel.

I jumped in the truck, hit the key, and roared off to the West up the blacktop to head off the Brunt group. I made a left and aimed at the intersection of 100th and the bike path. If they came out that way, I would tell them to retrace their steps and get back on course. 70mph up gravel, the tires spewing chunks, and I made it! They hadn't come out yet. I stood and peered out into the early morning light, waiting for signs of cyclists moving up the path toward me.

Next: Troubles Under The Sun
Posted by Guitar Ted at 1:00 AM

I'm not sure i want to admit it but the "brunt group" included brunt schotz and myself.
That was all part of the plan though, just wanted to add some excitement for the crowd!

I'm liking this! Helping me remember the different parts of Trans Iowa! Howled you like the Cajun food?

@AttackDentist: My wife was pretty stoked about the Cajun stuff except that she isn't into rinds. That said, you will find something out in one of my upcoming posts that you might find humorous and sad at the same time! Stay tuned!