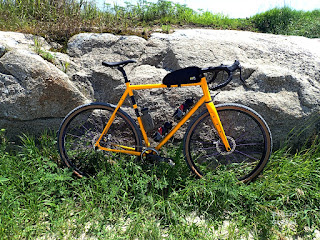 A while back I told you all about the noise I tracked down on the Gravel Bus, but I haven't gotten into what I think about the bike. I was going to wait to get around to that when I got a 'Quick Review" of the Standard Rando v2 up on RidingGravel.com, but with the way this year has been going, I have had to keep pushing that back to allow for other stories to go up.

And it may be a while before I get around to posting about this bike there, by the looks of things.

So, I'll go head and share some of my views on the ride and what I think of the bike now that I've had it for about a month now. My initial build spec and more is found here. This won't touch upon any of the specs and whatnot, so click there to find out about the build and gearing.

The ride of the Standard Rando v2 is pretty darn nice, really. I can see why it was I wanted to buy the first one I reviewed. There is just something about a more traditional frame tubing layout. That 'almost-level' top-tube and full length seat tube do something sweet to the ride. Is this bike lighter than the old one? It definitely is lighter, mostly due to the obvious. That carbon fork does shave a fair amount of weight off the Standard Rando v2, that's for sure. However; I often wonder if this version's steel tube spec is a bit lighter as well. There is definitely a bit more tire clearance, but sadly, not enough for these new-crop 700 X 45-48mm tires coming out now. Not that this bike needs that. The Salsa Cycles Stormchaser, which I reviewed for Riding Gravel, definitely needed those big meats to ride smoothly, in my opinion.

Again, that low bottom bracket lends so much stability without resorting to a slack head angle, like the Stormchaser has, so it avoids the tendencies the Stormchaser had to be a bit of a wanderer when ridden slowly up a climb, for instance. In the area of handling, I am happy with the Standard Rando v2.

I've been itching to get this into the test rotation for Riding Gravel, but I have to clear out the tire reviews I have ongoing and maybe then I can slip this one into a wheel review or something else. Barring that, I have been wanting to slap on some fork mounted cages and go for a good, long ride on the Gravel Bus. Soon.......
Posted by Guitar Ted at 1:30 AM

Trans Iowa Stories: The Wind, The Hills, The Lightning!! Part 2

( L-R) Williams, Shotz, Gleason. The T.I.v10 leaders at North English  " Trans Iowa Stories" is an every Sunday post which helps ...