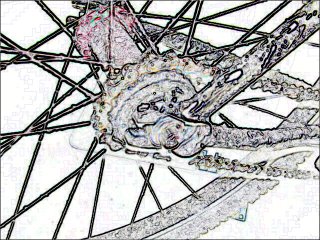 I was talking with one of our product reps the other day when he made an interesting statement. He said that singlespeed and 29"ers as movements in the mountain biking world have their roots in the Mid West. He said that the Mid West is where these ideas took hold and started to influence other riders. Is that possible?

It seems to me that any trend in any arena tends to start somewhere else and then slowly find it's way to the middle of the country about five years later. It's as if we are a sponge as a nation, and anything that gets absorbed is diluted and old by the time it soaks into Iowa or it's surrounding environs. I just find the idea that we here in the Mid West started any trend, especially in mountain biking. For that matter, I find it hard to believe that we even helped a trend along before it caught on out on the coasts.

Speaking of which; the very same rep said that you can hardly find a 29"er out on the west coast, which I happen to know is a false statement. I only mention these things here because this is a well known individual in the industry and if this is his perception of single speed and 29"ers then the influence he has is important to those two facets of mountain biking.

Does the industry really think that single speed and 29"ers, together or separately, have it's popularity base in the Mid West primarily? Could that actually be the case? I find that hard to believe.

It is true, though that alot of Midwestern cities and towns have their fair share of both types of riders. Minneapolis, Kansas City, and Omaha/ Council Bluffs come to mind. But there has to be a "hotbed" of 29"ers and single speeders that was more influential some where else. It just couldn't be a Midwestern thing, since we are generally not known as trend setters. Then again, maybe we are just a bit odd in this. Perhaps we did get the ball rolling with single speed and 29"ers. Maybe cycling trends will start forming in the Mid West on a regular basis? .................Naaah!