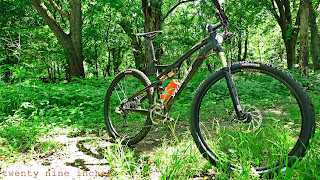 Getting The Horse Ready Part II: As I alluded to yesterday, I had put a few new parts on the Specialized Epic Marathon. The Blunt SL's are installed and the bike is good to go with the proto Ground Control tires. I'll either have a replacement rack to throw this and the Big Mama on, or I'll be doing a quick refurb on the old, rusty T2 Saturday before bugging out of town.

I see the forecast for El Paso is HOT! I'll have a few days to acclimate before I get a chance to ride there anyway, so hopefully I can get some sort of riding done down there. Updates will be not quite as regular as normal, perhaps, but I'll do the best I can while I find time.

And -Oh By The Way... Did anyone see this, (or a story similar to it), concerning Alberto Contador? Yes, the guy who recently (maybe) won the Giro. Oh, yeah, did you notice that "maybe" too. Yeah......road cycling just got even weirder. And get this, he'll be running in the Tour de France before they settle his case from last year. So.......what if he is guilty? Who cares? Just move everyone behind him ahead one spot, right?


Well, that story I referred to above? It has this little nugget in it:


"If Contador is banned by CAS it will render the last three weeks a huge waste of time. Contador's effect on this race has been enormous, and it's not as simple as taking him out of the results and promoting everybody else.

Incredibly this year's Tour could go exactly the same way now that CAS has postponed the hearing.

Contador - who is showing more and more of the traits that Lance Armstrong did at his most ostentatious - has refused to bow, or show a modicum of sympathy for the race whose result will be rendered meaningless if CAS decide to ban him and strip him of all results since last July due to his positive test for Clenbuterol."

Wow. Just wow....... I guess I won't even bother watching the Tour then. Why would I? It all is a circus that has a few clowns that I don't think are very funny. And they  are affecting the whole show.

Dirty Kanza 200: Tomorrow is the big gravel event in Kansas' Flint Hills region. First of all, I want to wish everyone well that is riding in this 200 mile gravel race. Secondly, I want to say, "Be careful out there!" It looks to be a repeat of last year's brutal wind and heat.

One part of me will miss the camaraderie and the atmosphere of the event. Part of me is relieved that I won't be punching myself out in the brutal wind and heat, which many of the Upper Mid-Westerners attending this event will be facing for the first time this year. And that's why I say, "be careful". It sneaks up on you down there, and of course, as you can see from my image posted here that I took last year, there isn't anything out there to offer relief from the elements.

Oh, and by the way, the image makes the terrain look flat. That couldn't be further from the truth. It is very, very hilly down there!

So, have a great weekend, whether you are riding in Kansas heat and wind, or wherever. Get on a bicycle and have an adventure. I'll be packing for my trip and debriefing the house sitter, then hitting the wide open road.......
Posted by Guitar Ted at 1:00 AM

For comparison purposes, how does the hill profile of DK stack up against that of TI? Just curious.