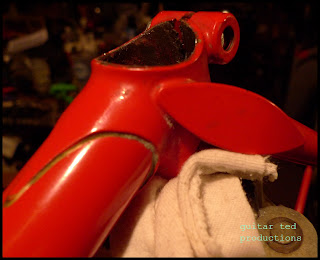 The LeJeune which I acquired last summer and started to work on in December has languished for a time. See, we really didn't have a winter, or much of one, so I just had to ride the fat bike when the snow flew and then it got busier at the shop right afterward when things warmed way up in February.

My original plan was to tinker on this when things were in that "in between" phase in late February/early March, but that got waylaid and now it's nigh unto May and I haven't done a gol durned thing with this frame and fork.

Well, the missed ride to work today due to a sideways blast of 41 degree cooled rain offered up the opportunity to load up this bike and get it back to The lab where I can start tinkering with it at odd hours. Now it resides in full bits and pieces glory between The Lab and the shop.

I need to rebuild/re-grease the hubs and then the next order of business is to get the wheels built. That means jettisoning the ancient, soft, weak tubular rims in favor of a pair of Salsa Cycles Delgado rims I have hanging in the Lab. Spokes were cut by an old friend on a rad spoke cutting machine he owns. Perfect. This wheel build should go down without much issue.

After that, the head set will be tackled, then the bottom bracket. Once everything is cleaned and prepped, I'll do a bit of tidying up with regard to the components and the main part of this re-build will be done. I do want to customize the free wheel though. I'll be wanting a lower gear on this rig, as the 53/42 crank won't give me any quarter. 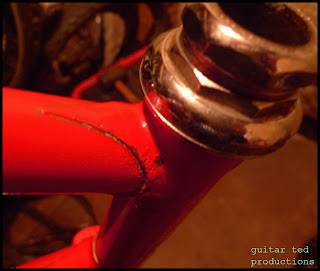 Then you get into the details. Look, this bike, although barely ridden as far as I can tell, isn't perfect. There are a few bubbles in the paint where corrosion is probably taking place. What to do? Re-paint?

I'm not going to take this down that far. It's a bicycle. It's meant to be ridden, not to be a showpiece. So, I am cleaning it up, greasing it up where that needs to be done, putting on some good cables and housings, and riding it. I probably will give it a good waxing before all of that, just for good measure.

And, as promised, it's going to do gravel duty. I am not totally averse to riding pavement, but I like gravel way better. I figure the Clement tires I got, the 28mm ones, will go on first, but at some point I am shoe horning in some 32mm tires and then leaving it.

It'll be fun to see how the old school geometry handles the gravel, and maybe this will point me in a new direction for a custom gravel bike. The BMC Orange Crush I posted about yesterday has some very tasty bits about it, but I want to see how this French version of road going might modify those thoughts, or not.