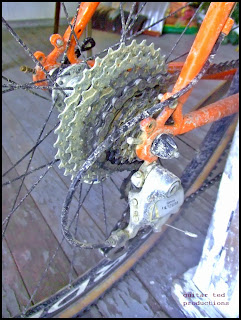 Last weekend's 3GR was by far the worst weather I've ridden in since last Winter. That long spell of dry weather really accumulated a nice layer of dust on the roads, so when it did rain on us Saturday, it turned into a pasty slurry that was sprayed up and all over everything.

It was one of those rides where you feel the grit of limestone in places you ought not to feel grit at anytime. A shower at home took care of that for me, but the bicycle? Yeah.....it was pretty much trashed. That slurry was all over everything and dried up in funny looking clumps.

I actually had to laugh Saturday when I saw all the gravel dust turned to mud that collected in the channel of my WTB saddle. I was riding seated on mud!

The best thing that probably happened Saturday was that we had to ride several miles in town which all was in the rain and that probably helped clean off a lot of what would have otherwise been on the bike. Well, except for the chain, which was full of fine grit. That required extra attention.

I know a lot of folks that use this or that to spray on their bikes to clean them off, or they use a spray from hose or bottle. I guess that's one way to do it, but in my experience sometimes it is just as easy and less ........muddy, if you simply just dust it off with a clean rag first. So that's what I did, which got rid of 85% of the mess in a short period of time. Then I went back over all of the bike with a watered down solution of Dawn and wiped it clean. Didn't take all that long, but I have to clean bikes for a living, so maybe that comes into play there.

Now the chain is another deal altogether. I have been trying out the new WD-40 Bike lube, and I have to say it is not very impressive stuff. Too viscous going on and attracts grit like a wax lube, well.......almost as badly as a wax lube.

Anyway....the stuff had collected a fair amount of the slurry and it took a few degrease cycles to get it somewhat decent and then I lubed it back up again.  Yes....with the WD-40. It's almost gone anyway.

Generally I use ProLink or as a back up I will use the good ol' Tri Flow lube. There are a lot of great lubricants out there but these seem to do as good as anything else in gravel conditions. ProLink actually cleans up the chain pretty well, but I like Tri Flow better in the drip bottle for cables and on derailleur jockey wheels and pivots. I'm sure ya'all will be lighting up the comments section with "you gotta try such-and-such lube.", but that's all good. You probably are not going to change my mind on this one.

Okay.....I ended back on the lubricant discussion again! But that to me is the most important part about cleaning a bicycle after a thrashing like I gave mine Saturday. So what if I missed a spot of dirt, I best not miss greasing or lubing something that is supposed to be moving. That's what's going to cause me frustration on a ride. Not the smudge down by the bottom bracket, if I miss that.  Not that I don't try to do a good job when I clean something on my bike, but I pay a bit more attention to the moving parts.

Anyway, the ol' Orange Crush is back up and running, looking good, and running smooth as ever. I suppose it will be getting trashed again soon enough, but at least for now, it looks bright and shiny. Oh yeah.....don't look too closely! She's got a fair amount of paint missing here and there!
Posted by Guitar Ted at 1:30 AM

Agreed on lube. I allowed some WD-40 product to be applied to my bike at the Breck Epic. Attracted too much grit and was difficult to clean off. I prefer Pro Gold, although it does not last really, really long under truly harsh conditions, it's clean (I use Extreme (unnngghhh, that word) for that). I wouldn't be afraid to apply it mid-ride.

I have always thought that wax repelled dirt better than most, but, perhaps didn't really lube as well.
John