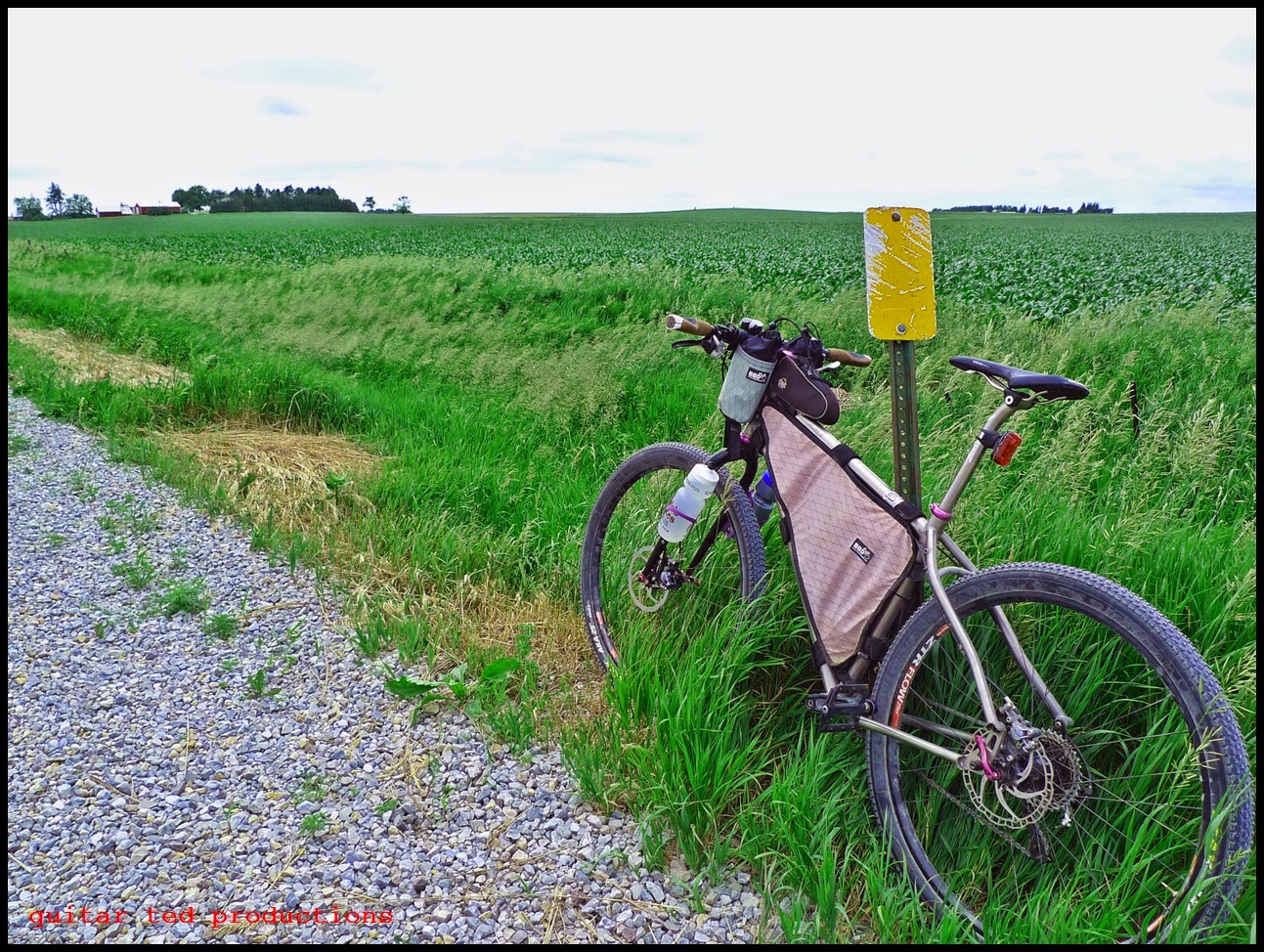 Last time I mentioned that my cassette had come loose. Well, it is a SRAM 10 speed cassette and the shim doesn't work with that cassette on the Salsa hub, at least it wouldn't the other day. I got the lock ring to tighten down further, and everything seemed to be very solid. I threw it back together and did a couple commutes with it with no issues.

Yesterday on my day off I decided to wait until the rain had been over for awhile before heading out. It was pretty humid, but it wasn't very sunny, with all the cloud cover, it was sort of odd. The wind was pretty stiff out of the Southeast, which were the two primary directions I was going to start out in as well- South and then East. That's okay if you make it to the tail wind section though!

The roads were packed and not too wet. There was hardly any dust. The gravel was messed up, for whatever reason, and there weren't very many "good lines". It didn't seem to make much difference with the GEAX AKA's and I rolled everything just fine. It was just the wind, really. To give you something of an idea, it took me two hours to get to the halfway turnaround and an hour to get back home from there!

So, a bit over three hours yesterday and it turned up two issues. One is a bit frustrating. I heard the clanging noises about the time I got out of the wind, so who knows how long it had been going on, but the cassette is loose again. Just slightly loose, but loose enough to make noise. I'm just about ready to toss all my SRAM garbage and go with a complete Shimano set up. My feeling is that this SRAM cassette is goofy.

The other issue is with the saddle. During the Winter, when I am doing shorter rides and am dressed differently, I guess I don't notice, but the Ergon saddle isn't doing the trick after a few hours. Maybe it's too wide, (I think this is the trouble), or whatever, but it is too close to Odin's to do anything with an untested saddle. That is why the Ti Muk s getting the WTB Pure V off the BMC for the time being. That saddle I know and it is comfy. Maybe when Odin's is over I will look into something different for the Ti Muk so I an put the Pure  V back on to the Orange Crush rig.

The last thing I need to do is get some bar ends on this rig. I really need some different hand positions! I may have some old Ergon stubbies around, but the shop also has BioKork grips with the longer "L" shaped bar end which might prove to be the best bet. I've gotta get this dialled in a few days because next week is the run up to Odin's and a week from Friday we're off to the hills of Nebraska!
Posted by Guitar Ted at 1:30 AM

Looking forward to seeing you out there! My brother and I will be doing the short course, and then manning the Nebraska Beer Blog stuff :).