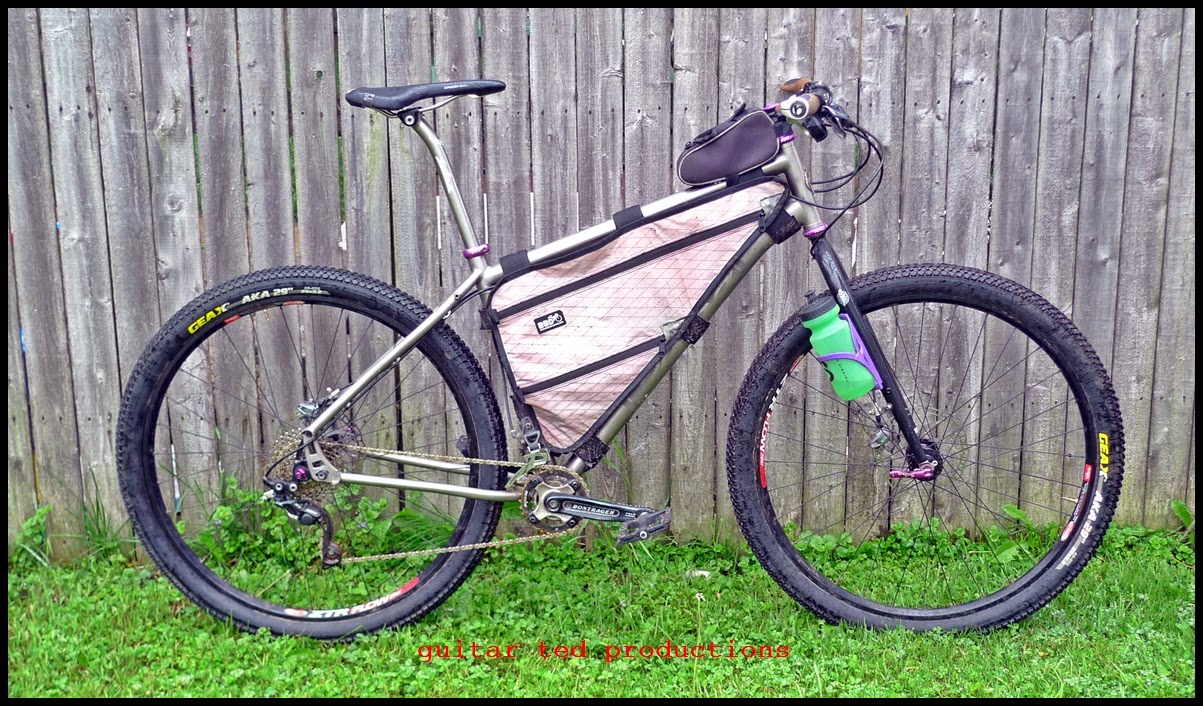 Yesterday I detailed out my Pofahl single speed rig and mentioned that I was considering that bike for Odin's Revenge and why. Today I reveal "the other choice" mentioned and I will talk about why By-Tor the Titanium Mukluk will likely get the nod. (Hint: It isn't just because it as gears!)

When I purchased the titanium Mukluk frame and steel Enabler fork to build up By-Tor, I had in mind that this bike could be a "do everything" type of bike if that's what I wanted it to be. Certainly, it is a very fine fat bike. I know that is its main purpose, and that it does what it was designed to do well. It is stable, comfortable, and fits those crazy wide tires and rims. However; this bike has more than one trick up its sleeve. I won't get into all of what I feel it could be, but I do want to touch on the hard tail mountain bike transformation you see here.

Obviously, I have a different wheel set based upon fat bike hubs with the rear at 170mmOD and the front at 135mmOD. This makes for some stiff, strong 29"er wheels. They are a bit on the heavy side, but that is because of the hubs more than anything else. If I had the latest fat bike hubs I could shave a fair amount off and they would weigh about what a decent set of 29"er hoops do now. I have Stan's Flow rims on here and shod those with a pair of GEAX AKA folding bead tires. This makes for a wide, fast rolling, and grippy set of wheels for all the dirt and gravel at Odin's.

Comfort on a long ride is king, and the Ti Mukluk has that in spades. Is it really different than an aluminum frame? Yes. You really can tell the difference here. My Snow Dog is great but it rides much "stiffer" than the Ti Muk does. Of course, that smoothness is enhanced by the Salsa Ti seat post which is super nice to have for the longer rides. The combination of the frame and seat post makes this the smoothest ride in my stable suited for Odin's.

The Ergon BioKork grips and saddle round out the comfortable bits here. While I have flat pedals on it now, those will be swapped for SPD's for the event which will be the only contact point change on the bike. Bags will figure heavily into the plan and the main compartment will be the Bike Bag Dude frame bag and his super useful Chaff Bags, (not shown), which easily hold water bottles or gobs of trail mix! Inside the frame bag will be extra water, repair kit, and perhaps some food or rain gear, (depending upon the weather forecast for the event), and exact contents will be determined later. The Chaff Bags will hold a water bottle and grub. Two more water bottles can go on the fork blades as well. This set up will keep almost all the stuff I need on the bike and off my back. The Planet Bike Snack Sack you see will be primarily for my camera and smaller items.

Of course, By-Tor is a geared bike. That it also has really low gears doesn't hurt, as I found out at Triple D, and that will be useful at Odin's. However, it lacks a big ring for downhill cruising. I may see about fixing that issue soon. Otherwise, that dratted SRAM 10 speed chain is going away. The worst chain by far I have ever used. It has done everything bad short of breaking, and that won't be long at the rate it is corroding. I'm switching it out to a Shimano or a KMC real quick here.

More on the set up as it evolves running up to Odin's. As you can see, the titanium rig probably is the smarter choice here. So far, that is the choice. More soon......
Posted by Guitar Ted at 1:30 AM

Howdy Sir,
I am doing the short course of Odin's this year, and was planning on using my cross bike with 700X40 Kenda Happy Medium tires. These have worked really well in gravel for me around Omaha and Western Iowa. Do you think the gravel around Western Nebraska is different enough to justify switching to a bike that can take larger volume tires?

@Tyler Loewens: I was cautioned about Odin's before I rode it last year that there were places where "a fat bike may have been a better choice" due to the loose, deep, sandier roadways in some sections of the course they had the first year.

Last year it wasn't bad. Things were fairly firm. But this year? There are 35 miles of dirt on the long course, so with that I feel as though a wider tire will work, and if it isn't needed, well then I can still ride the bike any ol' way. If I do need that wide tire, I have it. I don't know, and I am erring on the side of caution with a dose of experience and some advice from a friend.

You'll have to make your own choices, but this is where I am coming from.