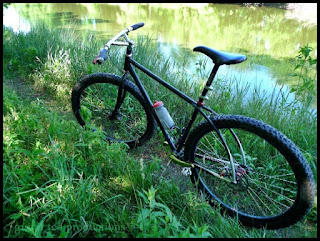 I've been a single speed kinda guy since way back when. I was reminded of this the week after Dirty Kanza when I was riding the 3GR with my friends, They remarked how "single speeding had served me well". That was what really made me reminisce. It wasn't anything I had planned, or sought out. Single speeding was a way of life for me. If I was to be riding a bicycle when I was young, there was no question- it was a single speed bike.

There were probably several reasons for that. one being the rarity and expense of geared bikes for kids back in those days. My parents were not wealthy folks either, so just having one bicycle was kind of a big deal for us as kids. Mine was a lime-ish green metal flake "stingray" style bike with a black and silver metal flake vinyl "banana seat" and a tall "sissy bar". What it was geared to, I have no idea at all. I just pedaled!

That bike lasted for a long time during my growing up, but I eventually outgrew it, and that bike was replaced with another single speed, "English lightweight" style Huffy, with a coaster brake. That bike became my urban scorcher, my off road bike, and my dare-devil rig. Again- I have no idea at all what it was geared at. Gearing? Whatever! Pedal harder!

Then life and geared bikes happened. Heck, I didn't even know what to do with either one, and it took me a lot of years to get things sort of squared away. I never did lose that single speeding bug though, and I still have it. I need to be out scratching that itch real soon again. I really miss it.
Posted by Guitar Ted at 1:30 AM

Well put. The silence and reduced maintenance of single speed bikes makes them such a pleasure to ride.

Nostalgia for single speeds; ALMOST makes me want to make budgetary and physical room. But then I remember any random hill between A and B. Now, a townie internal three-speed seems like the simplicity ideal.