The registration for the 7th annual Renegade Gents Race opened up March 1st and I wondered if we would be making our 7th straight appearance there. As many of you readers know, this event has been my favorite ride of the year for quite some time now.

March 1st went by without any chatter from my social networking teammates. I decided to throw out a Tweet which expressed my wondering about the status of Team Careless Whispers. (More on the name in a moment)

In the meantime between Wednesday and yesterday morning, I resigned myself to the understanding that someday the streak will be broken. Just like all those years I went to Frostbike and now I haven't gone in two years. I think it is healthy to have a sense of things ending at some point, because they will. We all like to romanticize things and think we will never see the end of.......fill in the blank. Relationships, jobs, luck, and that bottle of beer won't last forever. So it is with my streak of Renegade Gents races. Someday that won't happen anymore, and I was okay if the end was this year. Of course, I didn't want that, but I accepted that it could happen.

That said, I am happy to report that the Careless Whispers will once again be lining up for the seventh consecutive time. Oh yeah, about that name...... Well, when this whole deal got started there was banter between the teammates that knew each other already about what the name of our squad should be. Something about the fact that almost all of us had had facial hair came up and then Sam, I believe it was, suggested we should name our team in honor of George Michael, who was famous for not only music, but that studly 5 o'clock shadow he sported in the 80's. Thus the "Careless Whispers" name, as that was a famous hit song by George. I think something born out of the look of ZZ Top would have fit better, but hey! It is what it is. 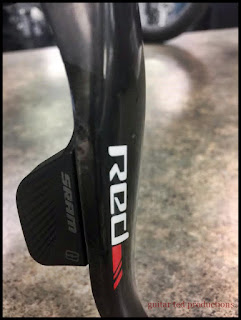 Friday morning, SRAM rep extraordinaire, Dan Jennings, came by to give our shop employees a SRAM e-Tap demo. This is SRAM's wireless, electronic shifting group. I was pretty impressed with several aspects of the system.

Now before I go on I will say that I am not a big fan of SRAM mechanical road shifting action. The whole "Double Tap" thing is annoying and less efficient, in my opinion, than Shimano's mechanical groups. However; I reverse my preferences when it comes to electronic shifting based upon a few things I've experienced so far.

The SRAM e-Tap is completely wireless, so you do not have any wires between components at all. No fishing wires through frames, no junction boxes, or hideous , limp wires flopping around your stem and rear derailleur. It also is super easy to set up. A monkey could set up a SRAM e-Tap derailleur and shifter set up. Shimano is a lot more fuss and you have to plug it into a computer to finalize the set up. But the big deal in the end is the ergonomics and in that area I think the way you depress the SRAM e-Tap levers and the feedback you get is superior to Shimano's Di2.

Make no mistake- both are really awesome. Shimano Di2 may shift faster, but having never to have to tune up the shifting and always getting precise, consistent shifts despite the conditions and circumstances blows mechanical shifting out of the water. Both Shimano Di2 and SRAM e-Tap are really that much better. It is also that much more expensive. These choices will have to be a less expensive alternative before many cyclists ever see the benefits, but I believe that will happen someday.

Get ready folks, Trans Iowa is only two months away. You are going to hear a lot about this in the next eight to ten weeks. Just a heads up for y'all.

My world will get more and more consumed with this as time passes. I have some in the field recon of a reroute to do, I have to check on a couple of other route details while I am looking at the course, and then it is on to drafting cue sheets so they can be checked in the field in April.

I am crafting a few e-mails tailored to specific groups- Rookies, Veterans/Finishers, and Volunteers, so that I can communicate some important points concerning the upcoming event. Look for those to go out very soon. Then I have the Truck With No Name in for servicing so it will be in tip-top shape for the event. I have a "check engine" light and an oil leak to be looked in to.

Anyway, I have a lot on my plate and very little time to deal with it all. This has been an odd year for me and Trans Iowa. Every year is different, but this one has presented its own difficulties. I hope to rise to the challenge and overcome the obstacles and once again put on a good event for all to enjoy.

That's it for this week. Have a great weekend and get out and ride!
Posted by Guitar Ted at 1:30 AM