Note: All links will take you to Ergon's site which is in German. To see the products, click on the pdf download links. The new "Joystick" grips can be seen along with the rest of the catalog. I appologize for any inconvenience this might cause but they are a German company after all!

Awhile back I did a review on Ergon grips. This post is an update of that review. (Note: I use the full length Ergon grip as pictured in the overhead shot of my Inbred 29"er. The grip is also available for Grip Shift applications as shown in the picture to the left) 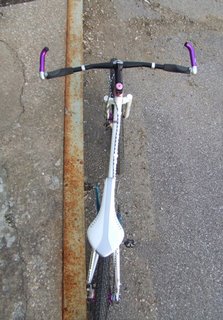 As I stated in the original review, the Ergon grip is very posistion sensitive. You really need to play with the tilt of the grip to achieve the optimum set up for your bike and your hands. In the overhead shot, you can hardly tell that the grip has a "tail section" due to the upward tilt of that tail. I made several micro adjustments to find "the right" tilt to the "tail" or flatter section of the grip. It was mostly pointed upwards and towards me as I sat on the bike.

Not long ago, a well respected endurance rider that tried these grips stated that they were wonderful up to about three hours of riding, but that they then became unbearable. Actually, he said that they felt as if they had "bruised" his hands! I thought that was rather odd, until it happened to me!

I used these grips at the Dirty Kanza 200 in May. I only made it about 90 miles or so before I had to drop out due to dizziness. I felt that the grips were a bit troublesome during the event, but it wasn't until afterwards that I experienced the worst part. I felt as though I had smacked my hands on cement for about a week afterwards. The butt ends of my palms were pretty tender, as if I had bruised them. The sensation went away after a week or so, and now I am fine.

Not wanting to give up on the grips, I tried readjusting them just after the Dirty Kanza while my hands were still hurting. I found that a downward tilt, away from my head and pointing the tail section of the grip down from horizontal felt better. This was a radical change from what I had been doing with the Ergons and nothing like my friends run theirs. However; after a couple of months of riding them this way, I must say that I won't be going back to the previous upwards tilt again. The true test is a multi hour ride, but in rides of slightly over three hours upwards to four hours, I have not experienced the "bruising" feeling again. I will say that the grips are slightly tougher to hold on to in rough stuff in this posistion, so beware and use a grippy glove if necessary.

Speaking of rougher riding. Ergon is going to introduce a "rounder" cross section grip ( called the "Joystick") for rough terrain, or for riders that require a better grip for bike manouevering. Look for it to come out soon!
Posted by Guitar Ted at 5:14 AM