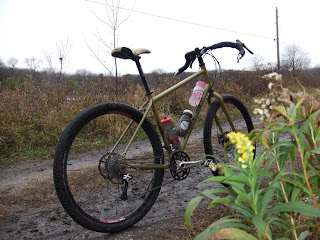 Okay, okay! I just got done doing a three parter about riding Fargos and here I am again posting about the Fargo. Better get used to it! This bike is that awesome!

This rig is getting the full on review/test on Twenty Nine Inches in the next few months, so look for more about the bike in particular there. I will most likely document the adventure side of it here.

Today's adventure was a trip up to the fire road through Black Hawk Park. I got through a bit of my urban commute route to get to Hartman Reserve's lower side and old Shirey Way. It is pretty much a Class B road these days and it was a bit slickery with all the precip around here lately. In fact, it sputtered snow and fine rain all the time I was out. 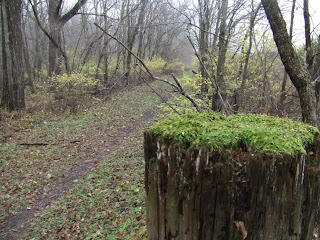 I got through the bike path on Riverside Trail to Pfieffer Park and crossed Krieg's Crossing over the Cedar to Geo Wyth and on to Cedar Falls. I passed another intrepid road cyclist riding a gray Specialized rig and waved hello as I passed him by on my way to Big Woods Lake. A half a lap on that path and on to Black Hawk Park in a pretty steady and tough headwind. Feel the burn!

On my way into the park, I met the same dude on the Specialized going with the wind, which he was quick to point out to me, as if I had it wrong. Guess he never read Kerkove's blog. "The wind is our mountain", right Jeff? Well, anyway, I made it into the park and went through to the old service road that goes up to Washington/Union access. 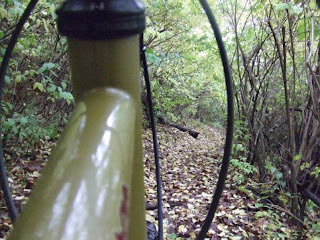 I went around to the Ford Road cutoff and took it north, as I had heard it was passable. Well, it was, barely! I had a hike-a-bike and several get offs for blow downs. I thought I might not ever see Ford Road! Finally, I saw some open trail and made it up to a tunnel of trees that was right above my head all around. Yep! Just like last year. Not much has changed except that in November the underbrush is dead. I climbed out up the steepish single track, out the dead straight access road and turned south on Ford Road. 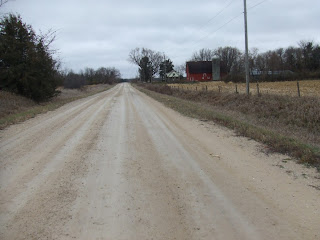 I was out in the open again, but this time I was with the wind, so I ended up in the big ring, which on the Fargo is a 46T. Yay! I made great time on the wet, peanut buttery limestone.

Even though I only did this shortish piece of gravel on my ride, I was totally stoked on how the Fargo handled the gravel. The smallish vibrations from tractor tires and the road grader were all absorbed really well by the Classico CroMoly tubing. Nice! I can't wait to throw down some multi-hour rides on the gravel aboard this rig. It will be a good one to use for this, as the water bottle count can go up to six and there is room for my frame pump which will help keep weight off my back.

I went through Cedar Falls again, Cottage Row, the bike path by the damaged Boat House, and past down town on my way to Geo Wyth once again. This time I wanted to check out some single track in the park. The ride last Wednesday was great on single track, so I was anxious to get in some more aboard the Fargo. 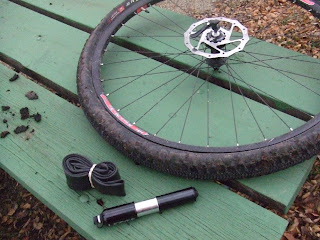 The trails were a bit too slick for the Vulpines nearly treadless casing, so instead of pushing the issue, I only did one trail and bailed off to the paved path again. I'll have to throw on something a bit more knobular for my next single track attempt. After stopping at the campground to refuel, I went to grab the Fargo. Wha.....? The front tire was flat! I rolled it around just a few inches and saw the culprit. A big ol' thorn! Time to change the tube!

Well, in near freezing conditions with a steady Northwesterly wind blowing on you, it doesn't take long to freeze the life out of your fingers when they are handling metal and rubber. I took several "warm up" breaks, so the tire change took twice as long, but I retained a modicum of flexibility and feeling in my hands!

Not wanting to tempt fate any further, I high tailed it home and then found that I had forgotten my keys! Mrs. Guitar Ted was out, so I was too! Thank God it only was a half an hour later that she and the kids arrived back home and let my cold shivering body back into the warmth of the house.

So, about four hours out there today and I accomplished getting the Midge Bars into a position I am happy with. I also will now cut down that steer tube some more since the position is nearly spot on. Also of interest, the bar end shifters fit right into the Midge Bars with no problem. I had heard that they didn't, so this was a nice surprise for me. All in all, I have the major stuff dialed in for now. Later on, I will be adding a few things to try out like fenders, a rack, and a couple more water bottle cages.