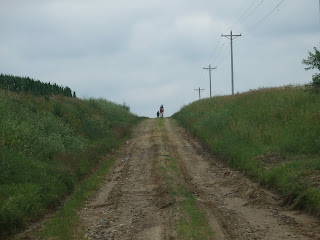 The Dirty Kanza 200 Chronicles: A Training, Gear, And Experience Log: Intro: Well, Friday I asked and nobody said no. So......even though I think you are all crazy, I am going to write my doings, my comings and goings, that have to do with getting ready for the Dirty Kanza 200 June 4th, 2011.

These updates will be posted on Sundays.

Background: Since getting into the event, I have been contemplating what to do different from my past when it comes to the DK200. I have tried and failed three previous times at this event. Once at the inaugural running of the DK200 in '06, and then again in '09, and '10. I have used three different bikes in all three attempts. The first try was aborted due to dizziness, and the last two due to extreme dehydration and heat problems. The last two times I ran out of water before getting to Checkpoint #1 which killed my efforts both times.

A bit about me is in order here as well, I think. I am married, have a part time bicycle shop job, run a website or three, and have two children in elementary school. Family is a priority for me, so training times are limited. I understand about sacrificing some things, and I have to decide what to set aside to gain a bit more on the training side to get better prepared this time.

Analyisis: First of all, if the DK200 gets crazy hot and windy again this year, I will not expect my efforts to be successful. I can't imagine how having 100oz of water in a hydration pack and two or three extra water bottles couldn't be enough water, but it wasn't for 66 miles. I'm not sure how I can overcome that issue at this point. (Open to suggestions here) Be that as it may, I am going to try and tackle this event again, and throw my best effort at it. 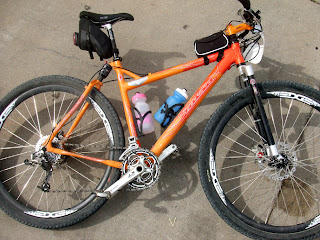 Last year, (and probably the year before), my training was pretty limited. So, that may have played into the failures. Normally I can deal with some pretty hot and humid stuff, but the drier winds and heat of Kansas seem to be my nemesis.

The Plan: (Subject To Change!) So, this year the training has already started. Longer rides at a moderate pace have already occurred. I am also focusing on losing weight now. I am building up a cross bike to test as a DK200 rig. Nutritional supplements are going to be tested in training. I will be working out a strategy for carrying things on the bike as opposed to the body. (Done it both ways and I'll cover the advantages/disadvantages of both).I'll be doing some stretching and core body stuff as well. 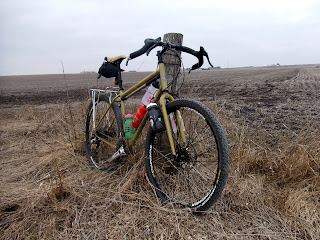 My Take On Race Strategy: The DK200 started out as a self-supported, time limited event. It really isn't either of those things anymore. You can pretty much come into a checkpoint a bit late, and the organizers let it go. There is no real "end" to the event. (Last year, riders were still being scored well after the old cut off time of 2am) Support is "discouraged", which means nearly everyone  gets support. Riders are catered to at every checkpoint with anything they want or need as long as they can find someone who will do it. That wasn't true of the early DK200's where a rider could only have a drop bag forwarded to a checkpoint.

It's pretty tempting to take the bait thrown out and "finish" whenever I can with all kinds of hand ups and people catering to me at checkpoints. And listen- you can do it that way if you want. I am not judging the organizers of the DK200 or anyone that wants to push the advantages to the limit. Those are decisions those people have made/will make, and I am okay with that. So, with that said, I am going the full-on self supported route, or nothing, and I will finish by 2am, or I'll just quietly ride back to my motel and accept a DNF. That's my decision, and how I am looking at this event. Your mileage may vary.

Okay, so there you have it. Next update will include some background on my bike choice and what has worked and what I have seen that doesn't.
Posted by Guitar Ted at 1:00 AM

I used to suffer from dehydration during rides too and I worked it out to two reasons.

Once I started drinking water like crazy the day before a ride, my problem disappeared. As for the blood pressure, some meds and some weight loss are taking care of those.

I'm riding to dk 200 also so if you want a 'drop bag' at the check points let me know my wife is meating me at checkpoints with the kids and some water/food I'm more of the mind of finishing a 200 mile gravel ride than 'self-supported' race. And let me know if you want some training ride company I'll come ride a century or 2 with you.

If you are open to suggestions, then I would get into a one hour a week yoga or "bro-ga" session. It has helped me both physically and mentally.

Here is my theory on why people do not finish - I think everyone is different and you need to race your own race. Stay in your pace and don't get sucked in at the beginning of the ride. I also believe that you are much better off keeping the water off your back. If you bike can't hold enough water bottles then buy a lightweight rear rack (Tubus Airy) and use old toe straps to strap water and gatorade bottles to it. Always carry extra - you never know when you may need it or you might be able to rescue a fellow rider (that always gives you a good feeling).

Another thing - start drinking extra fluids at least a week before the ride...

One more thing - Don't forget these 5 words will riding:

"First of all, if the DK200 gets crazy hot and windy again this year, I will not expect my efforts to be successful."

I just read your mental toughness posts and with the above quote it seems you are setting yourself up to fail. Do Ek, Mieser, and Farrow think this way? Remember when Farrow should have dropped from TIV5 and instead slept for a bit and finished?

I too have work, family and extremely limited training time. That's fine, I would not have it any other way. I'll never be at the front of these events. Not a big deal. Set your weekly hours goal and stick to it. Get up early, ride late, whatever it takes. It's all about getting the time in.

I would think the Fargo would be an ideal bike for this ride.

Good luck with the training.

"First of all, if the DK200 gets crazy hot and windy again this year, I will not expect my efforts to be successful."

Guess you forgot about your other post full of good non-defeatist advice?

@J-No, @jkeifer: I figured someone would pick up on that. See, the thing is, it isn't worth me getting waaaay too far over my head, causing me sickness, going to the hospital, (which- by the way- some folks had to do at last year's DK200), or dying for it.

That's also something I allude to in the mental toughness posts. It isn't easy to know "when to say when", but sometimes, you have to.

Your mileage may vary, but after sitting in the parking lot near Checkpoint #1 at the DK200 last year and not recovering at all- despite massive fluid intake, food and rest- for over an hour, I decided to pull the plug. The year before, I was ill before the event even started. So that was an entirely different deal. Still- I started and went as far as I could.

So- it isn't like I haven't done a lot of the things I suggest, but again, if it gets that brutally hot, I know what I am up against, and that success in those conditions for me is a very low percentage, if I want to come back and ride again some other day.

There's definitely a difference between defeatism and being realistic. I'm not a fan of the "I don't know the meaning of quit" school of mental toughness.

Going into Arrowhead this year I knew that if conditions were especially tough (soft snow, extreme cold) I would probably not finish, but I'd push on until I didn't make a time cutoff. Luckily it didn't come to that.

In an unsupported event it's important to know what conditions are cause for a DNF. If it hasn't come to that keep going. I know that if I drop without good cause I feel awful about it for weeks.

We can only hope heat will be a issue at TI7 !

After riding DK three times and TI four times I can share a few things that I have learned. I can't promise they will help you, but they may.

1. Starting tomorrow commute as much as possible and take the long way home. Two and half months before the event try to get in four 15 mile rides in a week along with a 2-5 hour ride on two out of every three weekends. There is no need to go further than a metric century unless you want to.

2. Watch your diet. No need to starve, but we can certainly stay in a fit weight range with a pretty light diet. Fruit, veggies, lean meat and mixed nuts.

3. Ride your cross bike at DK. Cross bikes are much lighter, are easier to climb with and are faster. There is no question about it. Get some tough tires and you will love the difference a cross bike makes.

4. The week before the race eat plenty of complex carbs and drink carbo loaded drinks.

5. During the race go out easy and just ride at a comfortable pace.

6. Separate yourself from anyone that wants to quit.

7. At the gas stations eat some ice cream (ice cream Snickers!), eat something salty like chips or, my favorite, potato wedges. I also drink chocolate milk. I am a big believer in taking in carbs and protein.

8. I recommend Gu Brew and Elete or hydration along with a water bottle with just water. Take some Hammer Enduralytes with you. These are amazing!

10. Ride as much as you can from now until the race and never doubt that this is the year!

You are too humble. You have finished the Arrowhead on bike, ski, and foot. Amazing.

Two nights out at -35deg F is not extreme cold for you? If I recall, two thirds of the runners dropped out this year.

I'd say you are a perfect example of setting a goal, preparing for it and then executing it.

Congrats again on your AH a trois.

Thanks J-No. Even with the events I've finished I still feel like a duffer. There are a lot of folks out there who put my performances to shame. Besides, I still haven't finished that darned Trans-Iowa!

I will admit that it was cold at Arrowhead this year though.