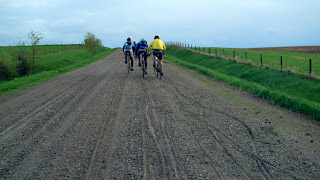 This is important. It will make or break you in Trans Iowa.

First of all, how do you effectively train for a 300 plus mile, gravel road, ultra-endurance event?

Ask a bunch of folks, you'll get a bunch of different answers. Riding lots of miles? Yeah. Do that. Test your equipment? Definitely. Dial in your nutritional needs and strategy? For sure.

But don't forget about your mind.

Okay, so how do you train mentally? I think if we take a look at some of the successful T.I. finishers from years past, we'll get a clue. Hints as to "what it takes" are in their stories.

Ira Ryan: Two time winner of Trans Iowa: Ira is a frame builder out in Portland, Oregon these days, but he has some great insights on riding insane distances. Check out his thoughts published in this interview by "The Bicycle Story" blog where Ira is recounting his experiences from an event called "The Raid Race" where he rode from San Francisco to Portland:

" I raced it in 4 days with the last day being 280 miles in one sit. I slept in ditches and a post office in Coos Bay. I rode into the night and ate lots of shitty food. The last day I rode the final 60 miles on I-5 northbound so I could draft all the trucks."

Think about that for a minute. Sleeping in ditches. Eating crappy food. Just to finish a really long ride. Here's a bit more from Ira. He's giving some gravel road riding tips, and this one is right up our alley:

"Train and refine your mental stamina for really long gravel races. If you get overwhelmed by the distance of an event, just focus on the here and now of the road. Ride at your own pace, take your time, and keep pedaling". (from "Gravel Road Riding Tips by Ira Ryan" by Daniel Berlinger)

Well, let's take the case of Trans Iowa Vet, Charlie Farrow, who had a full on intestinal "rebellion" on his hands with a 100 miles to go in Trans Iowa V5. Charlie had made the decisive lead break, but fell off the pace about 150 miles in and in the middle of the night, got sick. Really sick.

Most would have "pulled the plug", but Charlie pulled over and slept! Yep! He didn't throw in the towel, he tried some rest, and was found to have finished the event, even when all looked like it was against him doing so. Mental toughness and creativity. Check!

Finally, I'll throw in my observations of Trans Iowa winner, Joe Meiser, who during his first attempt at the event, completed it. That's amazing enough as it is, but I think that we can derive some clue as to why he did finish that first time out, and why later, that he won a Trans Iowa. He was calm.

It struck me as odd, and different, that every time I spoke to Joe at Trans Iowa V3, he was calm, level headed, and dare I say it- serene. He was the same at mile 127 that he was at mile 330. Keep a level head. Stay calm. Keep moving.

The Trump Card: Of course, you can be supremely confident, serene, creative, and mentally tough as nails, and still fail at T.I.V7. Weather, mechanicals, and other things beyond your control can derail even the best strategy. So, if Trans Iowa V7 doesn't go as you'd hoped it would have, don't despair. It happens to the best of 'em!
Posted by Guitar Ted at 1:00 AM

Definetely the mental part is the most important. My riding partner Hellmut and I have been talking about the subconscious part that almost hinders you from making the checkpoints so that you don't have to keep going. We are focusing a lot more on mental strength this time than physical.
Ari
T.I. Dinosaur Club

I believe the most important thing one can do to prepare mentally... 1.) Recognize that at some point you are going to reach a very dark place. and 2.) Decide BEFOREHAND how you are going to react when you get there. If you wait until you get there to decide, you will make the wrong decision. That, and like GT said... keep a level head and remain calm. Good luck to all preparing for TIV7.

Yep, stay in the moment. When I get low I look around and say to myself "this is where I wanted to be and what I trained for. I'm here and I'm doing it."

Don't think too far ahead. Think about that next cue on the sheet not how much further it is to the finish.

Easier said than done of course. Did any of that make sense?

All good tips. Here's one that I use. Think about the race every day for about a year. I try to picture myself succeeding, meeting my goals. Accept nothing else.

... And that night, when Charlie Farrow arose from his slumber, it was Matt Wills, Ben Shockey and I that he rejoined the race with. All of the sudden, out of nowhere, up rode Charlie with this wily look on his face. It's a scene I'll never forget.

He then proceeded to unceremoniously drop all three of us... Of course.

But we all finished, and that was the ultimate goal.

@All: Wow guys! Awesome points made here. This really helps and I learn a lot from all of you, believe me!

I'm sure the T.I.V7 Rookie Class will also be learning much from this as well.

Thanks again for all the great comments.

Thanks for all of the shared knowledge...Great advice from Mr. Eki