I talked a bit about these leather cycling gloves by Recovered Cycling last week. Well, I've worn them everyday since then and I have posted my review here on RidingGravel.com.

These gloves are pretty nice, as you might surmise from my review, but what is more, I haven't had any problems with my hands going numb since I started wearing them. I alluded to the fact that these gloves take on the shape of your anatomy, so that is probably why they feel so awesome to me. If you think about it, almost any good leather item does this. Shoes, baseball mitts, and leather saddles for cycling and horseback riding come to mind here. So, maybe this is why they work so well for me.

I almost feel like they are too classy though. I mean, maybe for an eroica type, old bicycle ride where they don't allow any modern stuff to be used or worn they might be right. I don't know, I don't keep track of that closely.  But I almost feel silly wearing them on a gravel ride. Maybe I should use cut off chore gloves! Then I might feel a bit more like I fit in. Ha! Anyway, they sure do feel good, so I'll just forget about the looks.

Back when I was a younger shop rat, and I was at my first shop gig, my old boss, Tom, was always telling me about the old cycling traditions and stories. He was really in to all the old European racing things and knew a bunch of stuff that I never did catch on to. Well, one of the things he made sure I understood was the Italian company, Silca, and its place in cycling history.

In fact, I bought a Silca Pista pump in the 90's, a sky blue one, from Tom before I even worked for him. I still have it, and I will likely never get rid of it due to Tom's influence on me. While it represents a tradition that goes back to the 40's, (the Pista first came out in 1940), it was a clunky thing to use and store. It always falls over, and the handle is far too short to get both hands on to pump with the thing. Did I mention that it falls over a lot?

So, Silca is now an American company and they just reintroduced this pump with some updates. Too bad they had to stick to much of the form factor this pump has had for 80 years. It's cool and all, but for $125.00, it isn't that cool. Plus, it still looks unstable with that narrow footprint. Oddly enough, you can probably pick up a used original one, rebuild it as good as new, (all the parts are still available), and have a relic'ed pump which would really exude the traditions of the past for a lot less than this "updated one". And it probably will fall over a lot. Just so you know.....

Or you could get their flagship, $450.00 floor pump. It's maybe the best floor pump you'll never buy because........ that's crazy money for a floor pump! At least it has a better, more stable base. So, maybe it isn't so crazy. I will let others find out about that....... Meanwhile, I have a sky blue Silca Pista floor pump I have to fix since I chucked it across the home shop floor and busted the gauge on it in a fit of rage when it wouldn't stand up right for me. Dang thing anyway.......... 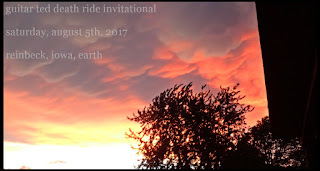 Since rain has been coming at the exact worst times for me to recon this route, I have been pretty quiet about the ride so far. However; I am hopeful that tomorrow I will get a significant portion of the route ridden.

If that doesn't happen, for whatever reason, I am resorting to a drive through of the route to get this done before I run out of time. Either way, a recon report with images should be forthcoming and then I can publish the gps files for the route.

It was suggested to me that the Broad Street Brewing Company doesn't really have anything much for food. What! Beer isn't food! Anyway, there is a convenience store and a restaurant in the city should someone be so famished afterward that they simply cannot go on without solid foods. Most GTDRI's have not finished at restaurants, just to be clear, so this is a tradition I am upholding here!

So, I thought I'd throw that out there just in case anyone was wondering about food. Any other questions? Hit the comments here with those. The updates will also appear on the Guitar Ted Death Ride Invitational site, so keep your eyes peeled.

Okay, that's it for this week. The Summer is slipping away, so get out there and get some!

I'll have to google erotica ride...ok, that's pretty much what I thought, you learn something new every day.

@Feeny Hollow: It is "eroica",NOT "erotica".