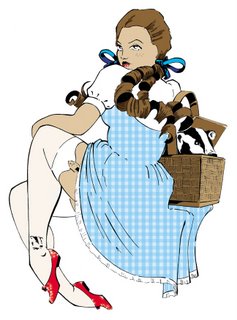 The Dorothy model, a production fillet brazed 29"er frame from Badger Cycles is about to become reality. The prototype is out of paint and is being built up for testing. This particular picture shows the artwork for the bike.

Since Badger Cycles is located in Kansas the model name and artwork were rather fitting. The badger in the basket is a nice, fun touch that I found to be pretty cool. The art work is a take off on "nose art" from warplanes of the Second World War era. I'd say that this nails it. 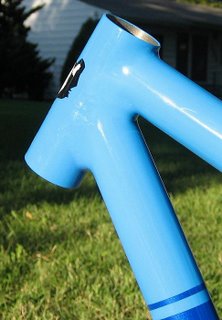 Here we have a first picture of the actual prototype showing off Rob Pennell's awesome artistry with the torch. That's a fillet braze joint folks! (Say "fill-it", not fill-lay!)

Steel tubing that's fillet brazed is an awesome looking way to join tubes that is extremely strong, and extremely difficult to get to look so smooth and radiused so perfectly. I used to be a bench jeweler, so I have an understanding of how difficult this is to do, and do it as well as Rob does it. You just don't get this level of work without being very talented.

I'm pretty excited about this frame and the opportunity to own this kind of workmanship. It'll ride quite well to boot! Rob's frames get awesome reports from their owners, so I expect that the "production" geometry frames will be every bit as nice in that regard, even though the tubing selections won't be optimized for each individual rider, as they would be for a full custom Badger frame.

I am pretty sure that this bike will be making an appearance at Interbike and if not, it'll show up somewhere that I'll be able to get a nice close up or two of her! Can't wait to see it for real!

The frames will be offered in six sizes and there will be a matching steel fork corrected for suspension available for purchase as well. The fork will also be a Badger Cycles produced piece. The frames will feature Jen Green head badges and the panel paint jobs, hinted at in the picture above. You can get more information and find out about pre-ordering one for yourself from Milltown Cycles. They will be the sole distributor for these frames.


Look for a possible full picture of this frame to show up somewhere real soon! Maybe even here or possibly on Twenty Nine Inches.