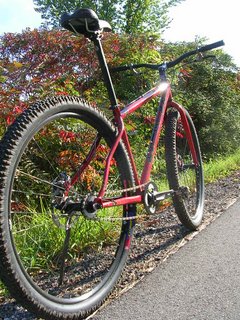 The Raleigh XXIX that has joined my stable of two other 29"ers has been getting tweaked and ridden for just a week now, but I wanted to get some first impressions out there for your curiousities sake. I will first say that this was the bike that prompted me to write the "Sloping Top Tube Madness" articles. I haven't backed off of any of those comments, but I will say that once you get your hands on a 400mm seat post, getting the bike to fit is a snap, as long as your top tube measurement is dialed from the onset.

With that, let's take a look at the pertinent design features that I thought would affect the ride from the onset. Then I will give you my ride impressions so far and we'll see if any of this actually translated out onto the streets and trails.

The first thing about the fork that was of concern to me was the lack of suspension compatibility which gives the XXIX a shorter, (by 40-50mm) axle to crown measurement than my other two 29"ers with rigid forks. This made me think that, due to the shorter length of the fork blades, it might ride a bit harshly in front. The frame also has other quirks about it that I noticed as I built it up and looked it over good. First, there is no brace between the chainstay and the seat stay where the disc brake caliper mounts. This is odd to see in a hardtail today. The other thing was the slightly ovalized downtube. It was ovalized in the vertcal plane from the head tube to the bottom bracket. Not alot, you can't really see it, but when you grab it with your hand, you definitely can feel it. I thought maybe that would make the frame laterally flexy or twisty.

Other things that I thought about were the effects of the longer Salsa Shaft seat post, ( Flex?)the Exi Wolf tires, ( slow and cumbersome, at least in the rear), and the two piece crank set, ( stiffer?).

The first rides were mostly commutes to work and back to help break in the bike and tweak anything necessary. My commute route has some off road and bike path included along with the road and even sidewalk riding. Curb hops in four different places and even a decent little down hill on the way home with a dog leg curve. I found that the XXIX exhibited none of the jarring front end stiffness through to the handlebars that I was expecting. I wouldn't say that the fork was flexy, though. It really wasn't, especially in comparison to the On One rigid fork on my Inbred 29"er, which I can visually see flexing back and forth as I ride it. The XXIX doesn't have that noticeable flex visually, but I could feel give. I surmised that the entire frame was giving and flexing somewhat, relieving front end impacts just a bit along with the fork.

The bike did steer very precisely due to the rigidity of the fork. Almost alarmingly so. I had to be careful not to put as much effort into the steering of the bike as I do with the other 29"ers. It also exhibited a tendency to change lines quickly and to avoid glass and sticks at the last second with ease. Nice!

The bike was a light feeling bike while riding, belying it's 27lb weight. The Exi Wolf tires, especially the rear, made acceleration sluggish. I'm planning on swapping out to a rear Nanoraptor to see if that doesn't make that sensation go away. The crankset felt stiff, the oversize eccentric bottom bracket shell gave a feeling of solidness. Where there was flex, it was found at the "weakest point", meaning that it flexed in the bottom bracket region at the point where there was the least material, and that happened to be where the chainstays connected. The chainstays did not have a brace, or "bridge" as some call it, and perhaps this would have eliminated the slight amount of side to side movement under heavy pedadling. Users of the newer generation of fat 29"er rubber might experience a bit of rub. I never could get the Exi's to do it. At least, not yet!

I got one decent single track ride on it. The trails were greasy from an earlier rain during the week, so I couldn't really open it up on some of the usually fast singletrack. In fact, deer were having trouble finding decent footing! Our dirt is almost like ice in terms of traction when it's like this. At any rate, the XXIX and I went down in the first corner, so I backed it off and concentrated more on ride feel.

The feeling of forgiving flex I found during my commutes was also evident on trail. The bike had that springy rebound and bump dulling ability that good steel brings to the table. I was running right over three inch diameter branches without loosing my grip or getting bounced off the saddle. The Exi Wolf's volume helping there, no doubt. The ride definitely was nice feeling. The trail testing will continue, so I'll reserve further comments till after I put some more off road hours into this bike. One thing I can comment on is that the slightly ovalized downtube deflects and sheds mud rather well!

Stay tuned for more!
Posted by Guitar Ted at 6:02 AM

quick question?
While riding the 2007 raleigh xxix what size was it? and how tall are you?

I got a medium based on top tube length. The Raleigh design at that time featured a 350mm post, and an ultra-short seat tube for its size, which was done in an effort by Raleigh to "fit more riders". Unfortunately, this erred to the small side of the human equation.

Subsequently, Raleigh, based upon feedback from riders and dealers, went to a 400mm post and revised the seat tube lengths for the 2008-2010 run of XXIX frames.

Looking back, based upon what I know now from riding a medium, I would always opt for the large size.

I bought the same bike http://www.bikepedia.com/quickbike/BikeSpecs.aspx?Year=2007&Brand=Raleigh&Model=XXIX&Type=bike though I think it had a 33t chainring and I added a 22 surley to the back. I just sent a note off to the wolftooth folks and then thought, maybe you'd be a better guy to brainpick. I'm basically old, fat, and slow and want to be skinnier and by choice (budget and liking steel feel) want to improve my 2007 Raleigh XXIXer. Here's the letter I sent those folks. I'm thinking a lighter racier tire set also. Any recommends? I still have the 10-year-old originals on.

Here's the letter I sent the wolf tooth folks so you can see how I'm thinking.


I bought a 2007 Raleigh XXIXer year model in August of 2006. This bike: http://www.bikepedia.com/quickbike/BikeSpecs.aspx?Year=2007&Brand=Raleigh&Model=XXIX while it says its crankset is this: TruVativ Fire X SS, 32 teeth,... in actuality, its stamped a 33 t. I rode this single speed a LOT for about 3 or 4 years then set it aside and got fat. At that time I stuck a 22 teeth Surly cog on the back of it and it has served me decently.


I'm back to wanting to ride again and I'm 61 years old and I like the give and forgive feel of my anchor-weight steelie frame. Unfortunately, I'm carrying 20 pounds more at the beltline than I want to and rather than gear my bike with multiple speeds or coronary out I'd like to make it a bit easier to pedal. (My neighborhood is very hilly) On the side of the Big Island of Hawaii's Mauna Loa volcano. I'm not in a hurry and lotsa reps is good for old farts like me.


What I'd like to know is, would this chainring directly replace my existing one? http://www.wolftoothcomponents.com/collections/stainless-steel/products/104-bcd-stainless-steel-chainrings I like the 30 t one. I think that's a 1.36/1 ratio.


DO I have it right that I want to go smaller gear in front to make it easier to pedal? DO I need to get the 10 mm bolts also?


I've been thinking of getting some of those fatty grips also for less road shock transferred up through my solid fork. Are you selling the red ones yet?


Hoping you have some good news for me,

@Mark- GET RID OF THOSE 10YR OLD TIRES! Those things were tanks and slow rolling back then, and I cannot imagine they have improved any.Anything new will feel AMAZING to you. Also, YES- lowering the tooth count up front lowers the gear ratio overall. The opposite is true in the back.