More Caption Madness and Other Photos 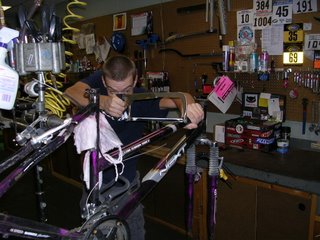 Here we go again. Another chance to be creative and take a pot shot at Mr.24: Jeff Kerkove.

The last Photo Caption Contest was won by Noo-noo for his excellent entry. Honorable mention goes to Paddy H. for his "punch line" to Noo-noo's caption.

Have fun! Enter your witty, pithy, or astute observation in the comments! 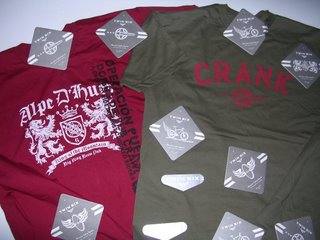 Keep your eyes peeled for the newest offerings from Twin Six

The jersey designs are fresh and fun without being gaudy and over the top. Yet they aren't stodgy or lame. You'll just have to wait to see them. I like 'em all! And this year they introduce some ladies jerseys, ladies t-shirts, and more t-shirt designs than you can shake a stick at. Very, very cool! And then there is a top secret project that I can't mention yet, but I promise: It'll blow ya'all away! 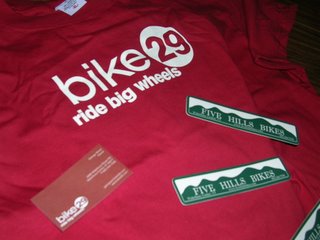 Thanks to George Wisell of Bike29.com for sending out this cool t-shirt and stickers from his shop out in Vermont. "G", as he likes to refer to himself as, is a huge 29"er nutcase! In fact, it's all he sells! You too can get in on the action by clicking on the link and checking out his 29"er goods. "G" can set you up and since he flogs some pretty nice 29"er sleds himself, he can point you in the right direction when it comes time to outfit your rig. Or, you could buy the whole enchilada from him! Or.......you could go to Vermont, twist his arm, and make him take you out on some primo Vermont singletrack! Now there's an idea! Not only that, but "G" plays guitar........and that's always gonna getcha cool points wid me!

Endurance icon and another 29"er nutcase, Mike Curiak has set up his own wheel building business called lacemine29.com. If you can ever get yourself to click off of his opening page, which has a rolling slide show of some of the most stunning Rocky Mountain trails you can ride, you will find out that Mike can build you a pretty cool, durable, and reasonably priced 29"er wheelset for any type of riding you can dream up. And believe me....Mike's probably already been there and done that! So he'll know whatcha need!

Well, that's a highlight on some cool companies and people that are passionate about cycling and 29"ers in particular. Check 'em out! I highly recommend them all as being class businesses and class folks. I'll post some others that I respect sometime after Interbike, so look for that.

And now I would like to close out by saying that if Mr.24 ever puts up a comment again that has a million repeats of "Badger", I'll have to take matters into my own hands! It's outta control, I tell ya!

Have a great weekend and RIDE YER BIKE YA"ALL!!