Rainier Is Here! (I Must Be Crazy!) 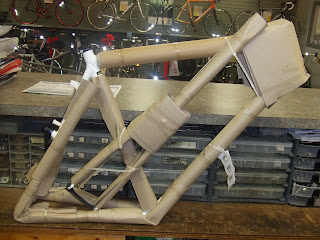 So.........I guess I got lucky! Back in October I mentioned this. I really didn't think it would happen because it is a very limited edition rig and I was told they were all spoken for. I put in an order anyway. A couple of e-mails were exchanged. Then today, the Fed X guy walks in with a box under his arm with this in it. 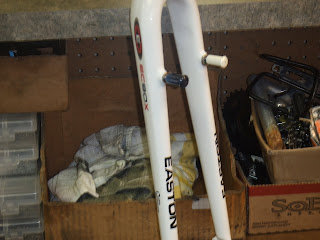 So this thing, which was a one off show special, is now not only a limited edition rig, but is here and beckoning me to go bogtrotting somewhere. Too bad the season just ended!

Not that it would have mattered, because now I get to build it. Which is really one of the best parts of getting a new frame and fork anyway. Well.........at least for this bike geek! 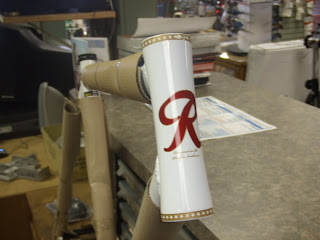 So now comes all of the choices. The brakes, the cranks, the hubs, the rims. Wheels will need to be built. A handle bar and stem will need to happen. A seat post and saddle. 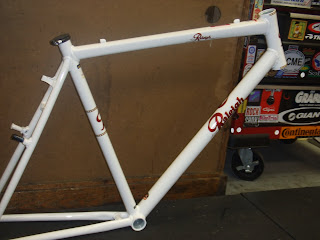 Yep! No gears here! Just a crank and a cog connected by a chain. No worries about shifting. No mud is too muddy! Bring it on!

Actually, the single speedness of the package is what intrigued me the most about this frame. If it had been a geared rig, I think I may have passed on it. Well, it is a single speed and it is white. I have a weakness for white bikes! 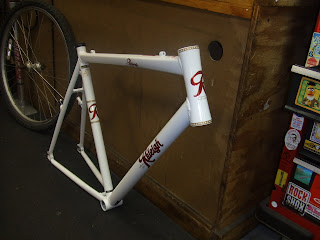 So now parts acquisition mode will be in full swing. I've got my eye on some red ano bits, a single speed hub set that will be an Allen bolt on deal, and a carbon post with a white saddle, of course!

So I'll leave you with this view for now. Next time you see this, it'll be ride able. That won't be for awhile yet, so hold yer horses!