SE Racing Stout And Some Other Non-Sense! 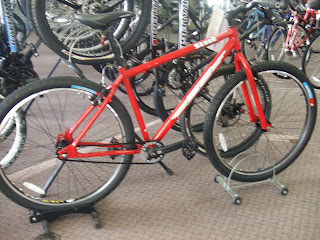 I have noticed on my stat counter that many folks are doing web searches on the 2009 SE Racing Stout. Well, we happen to have one or two now in stock where I work, so I thought I'd lay down some images and give a bit of my impressions on the bike. Although I have reviewed a Stout 29"er before, there are enough changes on the 2009 model to warrant another look. 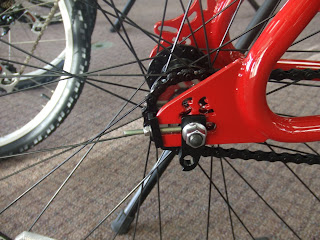 <===The classic plate drop out and loop tail.

SE Racing has adopted steel as the material of choice for the '09 Stout. The frame has many new details that the previous models did not have. For one thing, SE Racing has adopted the classic "loop tail" stay design and welded a plate drop out that has the "SE" logo cut through it. Cool! A drive side chain tug is stock as is an aluminum derailleur hangar for those that would want to gear this rig out. Also, the frame has cable stops for the rear derailleur only. If you were to run a front double crank or triple crank, your cable run would have to be full housing with the housing zip tied to the frame. At first I thought this was rather odd, but now I think I get it! SE may have been thinking that some of you may have top pull front mechs, and some of you may have bottom pull mechs, so the lack of cable stops for the front derailleur may have been intentional based on that, or not! At any rate, it leaves a cleaner appearance when running the bike as a single speed or "one by" set up. Finally, the rear wheel is a geared cassette wheel with a single speed spacer kit, which makes swapping over to the geared set up that much easier. 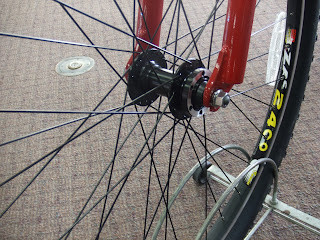 The SE Stout has traditionally been a cantilever braked model, and the '09 is no exception. By the way, the stock linear pull brakes work really well! However; if you would rather run disc brakes, SE Racing has made it very easy to do that. The hubs are disc brake hubs and there are International Standard tabs on the frame and fork. All you need to do is to throw on your favorite disc brake set up. The only downer is that these hubs are boat anchors. Obviously, a new disc brake wheel set would carve out a lot of pork from the SE's nearly 30lb weight. 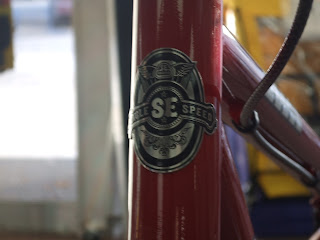 Over all the steel frame is beefy and stiff. My short little test ride revealed no flex to be concerned with in the bottom bracket area. The frame uses an old way to attach the bottom bracket shell to the chain stays that is a hold over from Schwinn cruiser frame days. The rear of the bottom bracket shell has a short stub welded to it. In turn, the chain stays are attached to the stub. This yields a very stiff connection to the rear of the bike. However; this also creates a "shelf" for mud to collect on, so be aware of that if mud clearance is an issue. Also, the frame loses the integrated head set and now utilizes a traditional head set, which I am glad to see. The top tube length is a bit more stretched out compared to the '07 model I tested previously. The frame angles list out at 72 degrees for the head tube and 73 degrees for the seat tube.

The SE Racing Stout for 2009 strikes me as a traditional 29"er type bike. The handling leans more to the stable side, and I would say it is very "29"er-ish". Not a "quick" handling, 26"er-ish feel at all. Some may dig it, but a fork swap might be required for those who feel the SE is too sluggish in the front end for them.

Finally, I will say that SE Racing has stepped up and offered a great value packed rig for $580.00. When you factor in the price, all the features make this bike reek with value and the nits are no big deal. A great first time 29"er rig and a great addition to a stable that needs a "knock around" townie rig, or just a bike to play on. 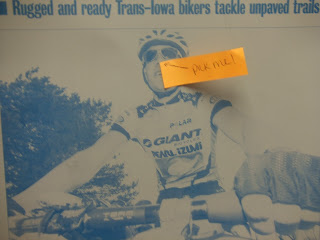 This is pretty funny, well.......at least to me! This is a printing plate from the Waterloo Courier, (which is no longer printed here) about the first Trans Iowa event in 2005. It shows Jeff Kerkove in his sponsors team kit hamming it up for a Courier staff photographer. There was a little story written up on the event there too. Pretty heady stuff for a first time event. Anyway, if you come and visit the shop, you can see this plate, but I won't promise that the stick up note will still be there!

Okay, as far as Trans Iowa goes, we're still waiting to recon the last bit and cue sheet production is set to begin after the holidays. Stay tuned for more updates, but honestly, that won't happen until after the first of the year.