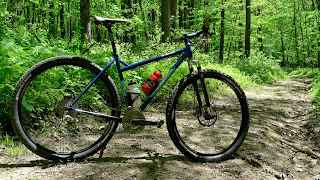 <===The trusty El Mariachi. Now if they could only cross this with a Dos Niner, what would that look like?

Well, I got three hours of riding in at The Camp yesterday. Parts of the Camp are primo. Awesome riding, but parts are ravaged by the d#@n loggers out there and are unrecognizable. Just plain bad. It's no in between either, which is really frustrating. especially so since much of the trail network is going to have to be constructed from zero again. I'm beginning to think I really don't like logging. Yep! I'm pretty sure about that right now. 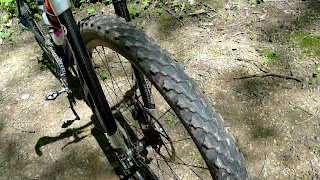 I'm thinking I really like these tires. Weird, but good stuff. Especially the front.

So, I ride for three hours out there. Man! Was the wind crazy, or what? Trees were fixin' ta throw branches at me all around. I could here 'em snappin' and crackin' and falling through the canopy with bangs and crashes. It was getting downright dangerous around noon. Lots of stuff already blown down too. Amazing!

I got to say that there are a lot of roots out there, which is obvious, I mean, it is forested and all. But I mean to tell you, it's worse than ever, or better than ever, which ever way you want to look at it! (I happen to think it's cool.) That brings me to the El mar/Dos cross idea. Steel front, soft tail rear. Or at least something that feels like that. Man! My back was aching after that ride, but it was sure fun.

I get home and no internet. Nothing. All afternoon till about 8:30pm. Put me waaay behind with posting and writing and such. At least the riding part of the day went super good.

I think the ride shows I am getting better fitness. It was super hot out, and I went easy at times, but afterward I didn't feel destroyed, so I think I'll recover well. It should be a good building block towards the DK 200. Okay, that's all I got today. Get out and ride, ya'all!
Posted by Guitar Ted at 1:00 AM