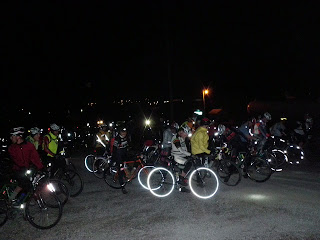 <===The scene at the start line. (Photo: Cornbread)

We were supposed to get up by 2:30am and head out to the start line in Williamsburg from Marengo. d.p. woke up at 2am to take a shower, so I woke up as well. Brother Mark and Daryl took a bit longer, but we were all on our way to the start on time. I had a full tank of gas that I purchased in Marengo and was raring to go.

The start was deserted when we got there, but after about ten minutes, and some ham shots of David Nice, who came along with us, we saw a twinkling light come up the road. Soon that turned into mini-streams of light and reflective clothing until the whole area around the cemetery where we started began to look like the stars had fallen to the earth. I gave a bit of a talk on dogs and the usual blather before I hopped into the Dirty Blue Box and honked the horn to get a move on. I looked over at d.p, and said, "Well, this beast is on the road!" He just said "yep" and smiled.

The mode of operation we employ, which really hasn't changed since T.I.V1, is to follow the same cues the racers have and to make sure there are no wrong turns, confusing spots, or roads that are impassable. So d.p. read the cues and I drove. We were heading due south at the time and just 11 or 12 miles into the event. d.p. was nose down in the map when I said "T intersection, which way do we go?" d.p. looked up and said "Oh s#i@!" I said, "What?" (Thinking , Oh no! Not again this year!") Well, it turned out that d.p. had always reconned this section in the light of day, when the dogleg in the south bound road was obvious. Not so in the dark! After a bit of confusion we got marshaled and grabbed the tape, lathe boards and signs. Hammer......where's the dang hammer? Oh yeah! I lent it to the Checkpoint #1 volunteers so they could hang the Hammer Nutrition banner. Crap! How am I going to pound in these stakes? 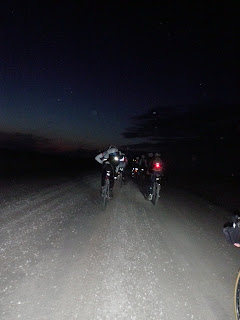 With apologies to eventual race winner Joe Meiser, I admit that I took some liberties with the trophy! I found it laying in the back of the Dirty Blue Box and used it, cave man style, to pound in my stakes. Works like a charm, in case you ever wonder Joe!

d.p. found an ingenious use for duct tape and stuck directional arrows right on the road. We were just finishing up when d.p. yelled, "Here they come!" I turned to see the lead pack motoring towards us at a pretty good clip. d.p. figured they were holding a 24mph average speed over the opening miles. That got me a bit worried, so we sped off and I prayed we'd have no more directional snafus.

Fortunately, we didn't. We found ourselves in Washington, Iowa and located our spot with the volunteers there. We were to have Cafe' Dodicci's opening soon, and the prospects of a hot cup o java were appealing. As soon as they opened the doors, d.p. and I walked in and bought our steaming cups of black goodness. And I mean it was good! Best coffee I've had in a long time!

We wished the lady at the counter good luck and hoped that they would see a benefit to our coming through there, since they opened three hours early for us! Later I found out that they had indeed fared well, and that our racers stopped by and purchased some good stuff. All worked out well there seemingly.

Anyway, it wasn't long before a huge lead group swarmed into the checkpoint. Gladly I witnessed our volunteers do such a great job that the racers were through and fiddling with the new cue sheets before they could catch their breath. It was awesome and a relief to my mind, as this was one of my concerns going into the event.

Now we were headed out of town and we saw that the smaller lead group had escaped up the road with chasers strung out behind. A decisive move? Hard to tell, but early break aways tend to stay out in Trans Iowa events since organized chases never happen. At least not involving large numbers of riders.

So we checked out the roads going into North English. The first B road was muddy, but I almost got all the way through it. I could have made it too, but d.p. was advising caution, and I decided that stunts with the Dirty Blue Box were ill advised at this point. So I back tracked and went around it. Soon we were in North English on a bright, sunny, and quickly warming day.

We were there a good 45 minutes before we saw two riders coming in. Charlie Farrow and.......Joe Meiser? Yep! Joe Meiser. I figured him to be a contender, but to be up the road on a two man breakaway? Hmm.....seemed risky. Anyway, I was plying Joe for some race info when he mentioned a tree down in a B road section. Brains addled by lack of oxygen, he said something about it falling, as if it fell while they were riding by. I was extremely concerned, because something was also mentioned by Charlie that Charly Tri had fallen and broken something. Something what? Was the "tree" down on the B road Charly "Tri" or was it a real tree? Well, you can't get into a racers face while they are in the heat of competition, but I pressed Joe for a clear answer when a screaming mad man rolls up on a black bike.

The guy was screaming at Charlie Farrow, "Lets go! Let's go!" He peeled a banana with one swift motion, inhaled it in a millisecond, and started right in screaming again, "Let's go! C'mon! Now!" Charlie offered some water, but the mad man in black would have none of it. Soon Dave Pramann came out and sensing something was up, hopped on his bike straight away and took off with the tall, thin, black clad man. Charlie took one last glance at the water and turned and hopped on his green Kelly cross rig and was away. Joe Meiser chased on by the end of the parking lot. And then it was peaceful........for a minute or two! And I never did find out about the "tree".

Soon other chasers were showing up. We decided to split and get ahead of the main four leaders and try to find out who that screaming black fellow was. As it turned out, it was Tim Ek, who had fallen way back when he flatted earlier. He chased on with a huge effort and caught the leaders at the North English convenience store. He told me later that the adrenaline just made him crazy, and that he normally wasn't that way. Sounds fair enough. At any rate, these guys were getting a sizable lead up the road now, and the hills were just kicking in. 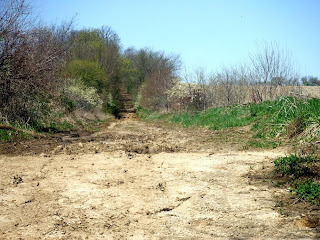 <====Checking out more B roads

d.p. and I continued checking the course. I made occasional Trans Iowa Radio broadcasts. We checked B roads, and drove about 35 to 40mph all the way to the Checkpoint #2 in LeGrand, Iowa.

Things were going smoothly. Too smoothly I thought. When was the hammer going to fall? I didn't know, but this T.I. was almost too easy so far.

Next time: Going into Checkpoint #2 and hanging out a bit.
Posted by Guitar Ted at 1:00 AM