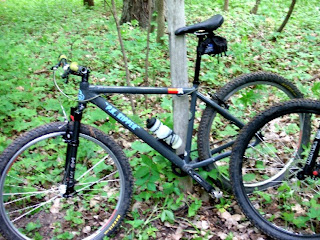 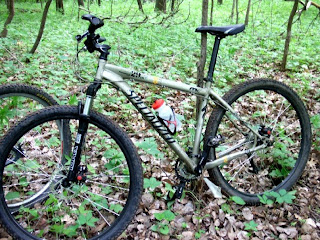 One of two gearies out of the five of the bicyclists. 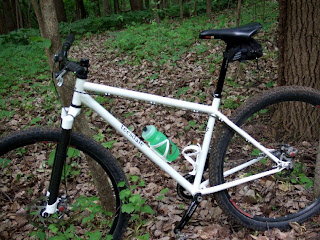 He had the fork crown and drop outs on this fork painted to match. 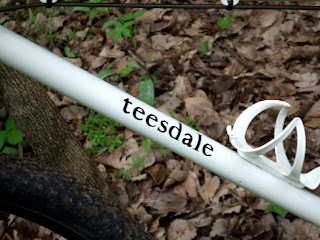 I rode the Lynskey Ridgeline 29"er SS, but ya'all don't want to see that, now do you? 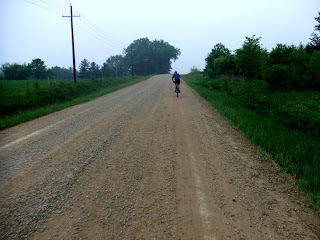 <====At the end of the ride we all got caught out in the rain coming back from the South Side. Nobody cared, and we all had huge perma-grins from our little single track feast. 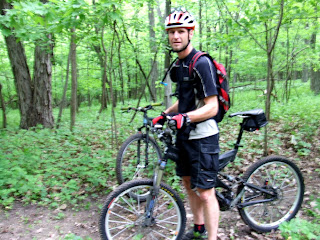 <===The Mighty Casey was riding the only 26"er in our group, but that's okay. We play with all mountain bikers! 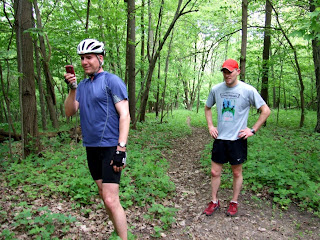 <===Jeremey making sure we are documented on Facebook and the amazing Andrew, who ran with us the entire first loop! He kept up too. He is training for an off road marathon in the Arrowhead region of Minnesota later in the year.

I've a feeling he'll do rather well! 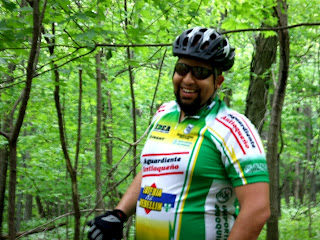 <===El Redg! He was riding only the North side and then the gravel to and from the South side. He bailed early, and was the only one of us that had the sense enough not to ride in the rain! 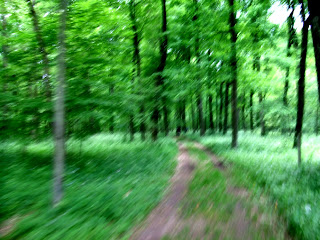 <=====And this blurry, out of focus pic is the highlight of the story today. You see, El Redg was turning around at our entrance to the South Side trails. Captain Bob, The Mighty Casey, and MTBidwell were all ahead and didn't hear El Redg say he was going back. I stopped to thank him for the ride and wish him well. So, as I turn around and look down the service road, (a service road I had never ridden in on, mind you), I could see the three others up the trail and thought it would make a great shot if I could get my dang point and shoot outta my jersey pocket, flip the cover, and take a shot in time. Okay, now look real carefully at the photo. See that small pole on the extreme right hand side just about half way up from the lower right hand corner? Yeah.......tough to see? Uh huh.........sure is.

Well, that pole, and its mate across the service road, which you can not make out in this pic, are strung together with a steel cable about 3/4's inch in diameter. You might guess at my speed by the blurring of the photo, and yes..............I had no idea the cable was there!

So I got clothes lined, miraculously right across my midsection with my left bicep taking the brunt of the impact. My right hand was still holding the camera up to take another shot after this one here, but I never got that chance.

Somehow, the cable which hangs only about two feet above the ground in the middle, slipped up over my front wheel, up over the head tube of the bike, grazed the handle bars, and went across me, stopping me dead in my tracks in the space of about two foot of distance. Can you say "deceleration"? It was like an aircraft landing on the deck of an aircraft carrier. Whoa there!

No harm done to the bike, I didn't fall off, and no broken bones. I got a seriously heinous bruise on my bicep, and my upper body is all sore already. But as you might expect, I finished out the ride!

The guys felt bad after hearing my loud exclamation as I hit the whatever-it-was that stopped me. (I had no clue at the time!) They came rushing back, but thankfully, not to a seriously injured rider. It could have been bad. Really bad!