T.I.V5: A Different Kind Of Report- Part I 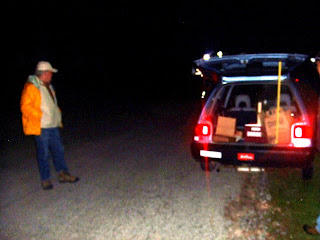 <===Daryl Pals, a volunteer, checks out The Dirty Blue Box at the start line of T.I.V5

Look, I could give you all the race report you expect, a total rundown of all the racing action, but honestly, that is being done in a much better manner by actual racers from the event. Go figure!

So why should I rehash it. I won't. I will give you my race report. Which begins far before the pre-race meeting, but I'll start out with Friday morning, just to cut to the chase here.

Friday, May 1st: Well, as a Trans Iowa promoter organizer for the past five events, I can tell you that if your ducks are not in a row by now, they ain't never gonna be! I got up with most of my stuff pre-packed. Of course, I have "another life" as a father and a husband, so I attended to that in the morning. After dropping off my two young ones at school, I was free to get down to Trans Iowa business.

First order of business was to load up the Dirty Blue Box with all the sponsors goodies we received. This had been stored down in the "Guitar Ted Laboratories" basement for safe keeping. Carefully hauling up stuff and packing it with care took a bit of time. Going over the supplies list, double checking the things I needed, and then worrying about what I was forgetting took a bit, but eventually I pulled out at 9:14 am to set off for the T.I.V5 course and see how things were looking.

I went to the furthest northwestern reaches of the course and stopped along some B roads and checked out some of the route along the way to Checkpoint #3. I was relatively pleased. I thought things looked a bit wet, but okay to race on. Then I had to high tail it over on Highway 30 to meet up with d.p. and David Nice to have lunch. It seems that everytime I go to Marengo I eat at Doose's Cafe'. That's not a bad thing, just a sort of odd thing. Dave Nice seemed in good spirits, and d.p. was anxious like I was to get the ball rolling on this event. Brother Mark showed up soon and we were having a good time. There was the matter of getting ready for the pre-race meeting though, so we headed over to d.p.'s house to get things set up with the race bags. 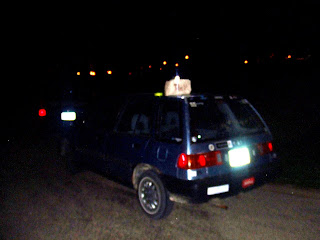 <===Looking like some evil pizza delivery car ready to lay on the pain!

The race bags were graciously supplied by World Of Bikes and were actually paper bags as opposed to the traditional plastic ones. Cool! Soon we had all the goods lined up inside and an assembly line set up. Loading up the 52 bags and the extras for volunteers took almost no time. soon we were finding ourselves standing around yakking and looking at our watches. Wow! We were actually ahead of schedule. It just seemed to be almost too smooth.

d.p. broke out the beers and we took it easy for a bit. A trip was made to the "lower level" of the d.p. residence to scope out d.p.'s new Teesdale track bike. What a sweet ride. Then it was time to think about going. d.p.'s dad, Daryl showed up, and then it was load up and head out to Williamsburg time.

When we arrived, an hour early, there were already racers waiting. We were all smiling at each other. Apparently, we weren't the only ones itching to get on with this thing. Loaded out the Dirty Blue Box's contents and set up some chairs. The volunteers were some of the first to wander up to the second level room. Soon racers started coming in. Familiar faces, old friends, and new acquaintances. It was getting on about 5:30pm and the meeting room was filling up. Time to get my thoughts together for the pre-race meeting.

Since d.p. did about half the work, and I didn't worry about it, or even think to ask about it, having 100% trust in his judgements, I was found to be a bit lacking in answers to the first three questions asked. Of course, d.p. was out retrieving something I had forgotten when the questions were asked. Great! Well, I don't mind looking foolish. I have for most of my life anyway, so it wasn't any big deal. The rest of the meeting went off without a hitch and riders were introduced and picked up their race packets.

Now normally we have at least 10 no-shows at Trans Iowa pre-race meetings. Sometimes more. I have been harping on folks to not pull that stunt, and ya know what? The racers listened, because we had a record of only one no-show. Awesome! And even that effort to fill the race bag wasn't in vein.

Going back to the previous Monday, a certain female had contacted me wanting in T.I.V5. I politely said no, it was too late. We wouldn't have excess cue sheets unless there were no-shows. Well, the women persisted, sending me another e-mail, which I ignored, and even called the shop, but I was gone at the time. Now I could be wrong about the following, but I bet I'm near to the mark here.

She was friends with another legit T.I.V5 entrant. She traveled down with said person and attended the pre-race meeting. When I came upon the one and only person not showing, and had announced his name thrice before attempting to move along, she jumped up and claimed that the no-show had transferred the spot to her.

I figured that the move was so cheeky it deserved to be rewarded. Kind of like the essay answer so full of glorious "B.S." that the professor gives it a passing grade. Well, I figured "why not", and consented to her. She immediately made an about face, grabbed the bag and disappeared. Hrumpf! Some thanks! Anyway, it was kind of cool to have a female in the event, as we are still wanting a finisher, or at least a contender to finish, of the opposite sex to undertake the Trans Iowa challenge.

So, we loaded out, and made plans to get some grub. On a trip out to the Dirty Blue Box, I said an off hand remark to some of the Lincolnites about being my own roadie, or something to that effect. Well, that was all it took for them to marshall some of the other Lincoln Crew and give me a hand hauling stuff. Much appreciated guys! You are all gold. Pure gold!

We hit up the"Pizza Haus" and got some grub along with some of the other racers. Later, we headed back to crash at d.p.'s house, but not before a night cap of Stranahan's was had. Then it was off to bed and an early wake up call.