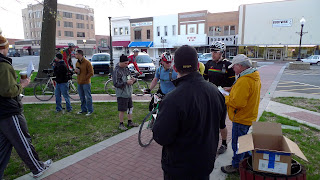 <===The Trans Iowa V5 Volunteers were awesome! Thank you guys and gals! You rock!!

Saturday Afternoon, May 2nd: So the afternoon was getting hot, breezy, and dusty. d.p. and I rolled along in The Dirty Blue Box and everything seemed pretty good. Then I got word that the audio was not coming through on Trans Iowa Radio. Bummer! I was without any way to rectify it, since it was all working from my end. I felt a bit frustrated about it, but what can a guy do?

We got to Checkpoint #2 with plenty of time to spare before it opened officially at 2:00pm. d.p. and I got some grub inside the convenience store, hung out with Oliver from Lincoln and a couple of other support folks. We had Matt Maxwell, a former T.I. vet ride over on his bicycle from the Ames area to help out here in LeGrand. He rolled in not long after we arrived, so d.p. and I decided to recon the Northwestern side of the loop and return to see how things were coming along.

That all went without a hitch except that we marked another dogleg in the course having learned earlier from the darkness that doglegs can be confusing, and this one would be passed by in the dark too, we figured. Once we marked it we were on our way.

We arrived back at Checkpoint#2 and racers were there shortly afterwards. The leaders were all inside grubbing out some food, others were just arriving, and the place was a hoppin'. This caused a bit of trouble. The convenience store had two employees working. One at the register and a young lady in back making pizzas. Well, the older lady came storming out, demanding guys move their bikes off the sidewalk and not to block the doorway, and on and on she went, waving her arms around and sounding authoritative.

Now I have been around Trans Iowa since day one, I have seen road group rides descend upon convenience stores, I have seen things like the BRR ride, RAGBRAI, and the RASH ride, and never....never have I seen a convenience store clerk shoo bicyclists away. Never! Why would they? It's big money to them. We figured a modest estimate of $500.00 was added to this place that day, but no. They didn't want us. Great. I suppose this would go on till 7pm until we were all gone. I was a bit worried, but d.p. and I couldn't stay for the outcome. We were moving on.

After picking the course back up after Checkpoint #2 where we left off, we drove on into Traer. Along the way, we were getting DNF reports from riders and the numbers of drops was stacking up. It wasn't hard to see that Checkpoint #2 was where all the DNF action was going to be centered around.

About this time we received a phone call from one of the volunteers giving us some info on a "lost soul". Apparently our cheeky gal from Friday night that snatched her chance at getting into T.I.V5 was off course. Like waaaay off course. Apparently she was reading the cue sheets incorrectly and was on the correct road on the cue sheet, but couldn't find the next turn. Our volunteers were out for a leisurely road ride and happened upon her. Fortunately, one of them had a smart phone with Google maps. After a bit of confusion, it was determined she was 50 miles off course on a road with the same name as the one she should have been on far westward of her position. Needless to say, she was done at that point! 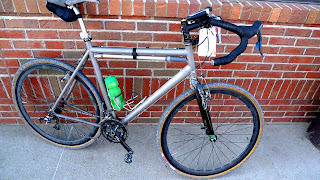 So we had a bit of a conundrum outside of Traer on just how to mark that turn before going into town. The street sign wasn't correct, and so we co-opted a sign that was there that said "Road Closed" and pasted a sign on it and used some red duct tape to name the road with. I guess it worked okay. d.p. and I recalled that we had done the same thing in T.I.V4 as well. Gotta be resouceful! 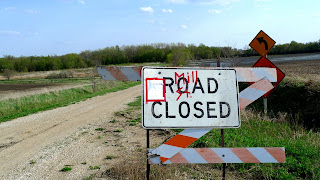 We arrived at the Checkpoint in Traer and no one else was there yet. I got a text from a volunteer that said Trans Iowa Radio was still not working, so I decided I'd give it one more try. I gave it a half hearted attempt, thinking it wouldn't come out anyway. After I did it, a text came through just minutes later. "It worked!!" it said. Then folks thought I was about ready to die of exhaustion when they heard it, but in reality, it was frustration they were hearing. The next post, I was back to the old self.

Next: Hanging out in Traer and being bad boys!
Posted by Guitar Ted at 1:00 AM