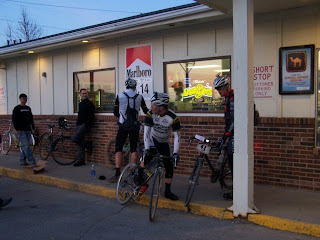 Saturday May 2nd: When d.p. and I pulled into Traer, it was late afternoon. We grabbed some grub, and then hung out waiting to see where our volunteers were. I got a text from one of them: "We're in Traer." I texted back, "So are we. We are at the Checkpoint. Where are you?" Well, it was about two minutes later when Scott and Ken rolled up on their bikes. Ken on a beautiful Rivendel and Scot on a very cool Pake' Townie. We ogled the rigs for a bit, and chatted the time away. Soon I got another phone call. "Hmmmm......I wonder who is DNF-ing now", I thought as I answered the call. It was the Blue Colnago! (aka Paul Buchanan) He wanted to know how long we'd be sticking around Traer and exactly where we were. Well, I told him, and about 20 minutes later, there he was with his wife.

Well, "Blue" chats us up for awhile, and then the leaders came in. Meiser, Pramann, Ek..............where's Charlie?? Well, we learn from a sad Tim Ek that Charlie got dropped. Seemed something was wrong nutritionally and he fell off the pace. Dave Pramann just shook his head in sadness and said, "We dropped him about 20 miles out from Checkpoint #2". Then they all went inside to raid the store while we were dumbfounded at the news.

It wasn't too long before the Three Minnesota Musketeers were back out and readying to ride. As they pulled out, Meiser says loudly, "Ahh! Fresh cream in the shorts!!" Gah! I didn't need to know that!

Well, d.p. and I waited for a bit to see if anybody else would show up. It was getting rather dark now. Blue said something about some Guinness and next thing ya know, we're all popping dark beers and Blue is inside getting more beer. This was getting to look like a place where we could get sideways with our duties real quick! Blue was talking about a bike purchase that got him sideways with his wife, and then she came out and told us "the rest of the story" to a rousing round of laughter from all the boys. Blue was red, if ya know what I mean, but it was all good!

Well, pizza was being talked about, and beers, and well........ d.p. and I figured we'd better skeedaddle before we got in trouble. So we politely excused ourselves and headed out down the trail. 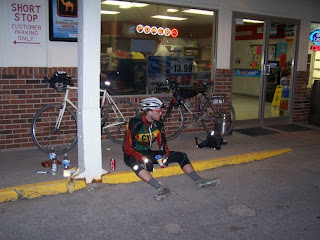 <====Cornbread ended his quest of T.I.V5 right here. Someday this guy will win T.I., I got a feelin! (Photo: Blue Colnago)

So we wound our way down and over and across Tama County until we found ourselves at a point that the route was a bit confusing for us, and later on we found out- for the racers as well. Just outside of Toledo we made a wrong turn and ended up in some Mesquakie land. Not good. We backtracked and got out of there and then somehow found the road into Toledo we were supposed to be on anyway. How I have no idea. Delirious and tired, the mind starts to play tricks on you and it was starting to happen to us as we closed in on a full 24 hours of being awake. 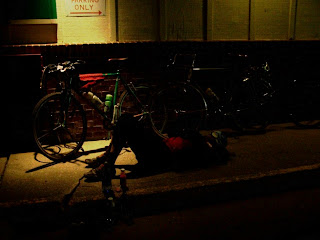 We were a bit amazed that we had not yet passed the Three Minnesota Musketeers yet, but we figured that they couldn't be too far up the road. Just east of Toledo we saw evidence of their tire tracks in the fresh gravel. It was enough to keep me interested in driving instead of falling asleep. Ridge Road was running out and we still had not found them. Then d.p, said abruptly, breaking a long silence, "There they are!!"

I saw the blinkies, and then the car lights washed over them as I tried to give them room. They looked to be in a steady pace line, nose to tail. Meiser, Pramann, Ek. Motoring at an amazing pace for this late into the event. D.P, and I were shocked at the speed they were carrying in this marbley, chunky gravel. We passed them, rounded a corner, and they were lost to view. We wouldn't see them again until the finish. 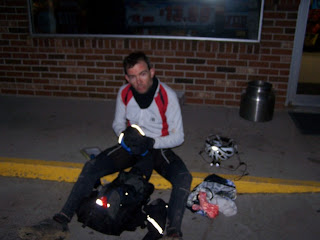 <====Jeremy Fry getting ready for the last leg of T.I.V5 at Checkpoint #3 after the convenience store had closed. (Photo: Blue Colnago)

d.p. and I made our way into the segment that went straight south towards Belle Plaine. I hated this section as it was all chunky, loose gravel and it made the Dirty Blue Box skitter and creak and rattle till my mind was about to freak. When we hit a B road, it was like heaven. Peace and relative quiet. Nice. Then the noise would pick back up again as we hit the rocks. Arrrgh! I was about to lose it.

Belle Plaine came and we checked out the convenience stores. One was closed and the other was going to, or so we were told, at 2pm. At any rate, we tried to find something to eat and drink. Nothing looked remotely good. The selection sucked! Then I finally chose some nutritional bars and a Rockstar energy drink, went to the counter and plunked them down, interrupting a conversation amongst some late teen/early twenty-ish something "boys". (And I use the term "boys" loosely!) One says to another, "Hey, you got some money! Buy me my stuff." To which the one with the cardboard box on his head (Really!) retorted back saying, " Aww! I ain't got any money, especially since I have to pay all those fines now. They took my car away this mornin', ya know!"

So d.p. and I took our meager food and drink choices and blasted outta there headed into the hills east of town. At 16th Street Trail d.p. says, "Remember this turn? We got lost out here twice on different rides." I did in fact remember getting lost out here. In broad daylight, no less. I hoped that it wouldn't trip up any T.I.V5 folks.

Next: "A little sleep, a little slumber, A little folding of the hands to rest "--
Posted by Guitar Ted at 1:00 AM