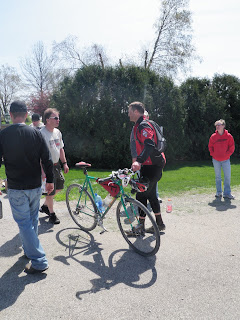 <===This man at the finish line was a miracle in my mind. Charlie Farrow had an incredible finish to what should have been a DNF.

Sunday May 3rd, 1:00am: d.p. and I are running the last bit of gravel that comes just east of Marengo. Things are going so smoothly that we decide to park it at d.p.'s house and sleep. Yes........sleep! Something I have not considered doing while running a Trans Iowa since T.I.V1. We get to his casa about 1:30am and I collapse on the air mattress and go out like a light.

1:53 am: The cell phone is ringing next to my head. I answer it. It's Tim Ek's wife wondering about his progress. I chat with her for a few minutes and then end the call. I try to go back to sleep, which isn't all that difficult.

2:12 am: The cell phone is ringing again next to my head. I pick it up and answer. "Hey, it's Joe. Did I wake you up?" Me: "Just a little." Joe: "I was wondering if you could clarify something for me on the cue sheets."

I smiled. Here's your race leader calling me at "dark-thirty" in the morning, lost, and being super polite. I don't know why exactly, but that made me smile. Right then, I was feelin' really great. I got Joe straightened out on what was going on. (The very corner d.p. mentioned to me earlier and said we'd been lost on twice before) Then I tried to get back to sleep. However this time I was uneasy because I was afraid more racers were getting lost, or that Joe, Dave, and Tim were wandering around because our cue cards sucked or something. (Hey- it was late and I hadn't hardly gotten a wink in 24 hours.)

2.22am: The cell goes off again. I don't think I actually ever fell asleep after Joe's call. This time it was Checkpoint #3 volunteers giving a final report. They tell me Charlie Farrow made it through and that Paul Jacobson had barely gotten there before the cut off and had just left. Awesome!

Well, after that I was awake. I wasn't going back to sleep again. d.p. awoke minutes later after a full solid hour of sleep. Good for him. Not so much for me! We left with d.p. driving his own car to the finish area. We didn't bother driving the rest of the course, we went straight to Williamsburg. That's the first time I have not seen the entire course during the event since T.I.V1. (You could say T.I.V4- but I saw everything we ran.) 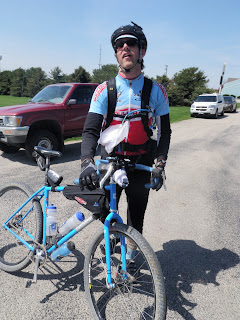 <===Matt Wills bags a second T.I. The look here says it all.

When we arrived we were the only ones there, but before long others started showing up. First it was Katy and Cale, our great volunteers. Then other support folks. Finally, at 4:52 am, we saw three sets of lights crest the final hill of T.I.V5. Meiser comes in with Ek and Pramann side by side.

Others come in at long intervals. More folks start showing up. T.I.V5 was winding down, but not before a few notable things occurred.

Early in the morning yet, one of the local residents, whose driveway we were basically blocking, rolls up in a white Escalade with bling 20 inchers and blacked out windows. I approach the vehicle as it stops just outside the driveway on the road and the drivers window comes down. Inside, a retired gentleman and his wife are staring at me incredulously. I state that we are running a race and that their mailbox is the finish line. He stares at me, looks me up and down, and then smiles. His wife suddenly leans over and starts to ask questions. A good sign! We pass "the test" and the couple drives away. Another possible conflict averted. 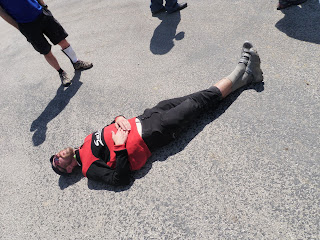 <===M.G. bags his first T.I. and then stretches out on the pavement to sleep. Fortunately he was drug off to proper sleeping quarters and didn't become road kill!

Charlie Farrow made it in. Amazing! I still am in awe of what he went through and that he still finished it off. No one- and I mean no one- would have second guessed him had he pulled the plug, and to be honest, I am sure a lot of us would have. Not Charlie! This was the greatest ride of T.I.V5 in my mind, without a doubt.

Then there are so many other great stories. Meiser's crushing dominance. Pramann and Ek gutting it out with Meiser all the way. Shockey on a fixed gear! And my sentimental favorite, Paul Jacobson, who got his long desired T.I. finish at last.

Single speeders split with gearies almost evenly. 15 finishers in all. (Earlier I had been reporting 14, sorry about the misinformation!) Great times had by all. Awesome volunteers, and an event that ran so smoothly it was scary. Thank you one and all.

So, finally everyone left and it was d.p. and I standing there at a non-descript intersection just north of Williamsburg. Just the two of us on a bright, sunny early May afternoon. We talked about some things. Laughed. Got teary eyed. Then d.p. stuck his hand out........

I stuck my hand in his, grasped it firmly, and as I shook it I said, "Sure! Why not?"

Then I crawled back in the Dirty Blue Box, drove home, and saw my family waiting for me at home. My finish line. I made it! I crossed the finish line of T.I.V5.

Next: Final thoughts on T.I.V5 and some potentially controversial comments about self support!
Posted by Guitar Ted at 1:00 AM