Note: "randomonium" isn't a word, officially- not that I know of. It is a word I use when I don't have a cohesive body of words to throw together for a blog post. You know- like a "miscellaneous" post, or a bunch of tidbits of thoughts, or.....well whatever! Here is today's post!

As I hinted back late last Winter, I have plans to upgrade the fat bikes here. The first project is to upgrade the Snow Dog. That's the blue, 2011 Mukluk that was purchased by a consortium of friends for my 50th birthday present. (Yes.....I am a Geezer! 24-7!! ) Anyway, the first bit for that project has been sourced and is coming from the U.K. The Carbon Fatty Fork features a straight 1 1/8th steer tube in carbon and a rear brake standard brake mount, so it will slot right in on my Muluk which has a standard steer tube and the rear brake standard for the front brake. The offset is 55mm and the axle to crown is 470mm. Pretty much spot on to where the Enabler fork is in all regards, except that the Fatty Fork is ridiculously light and is covered in orange bird doo-doo decals with a cartoonish cupcake. Who wouldn't want that?

This fits into the fat bike master plan as such: The Snow Dog will become the "all-terrain" fat bike in the stable. It will be the bike I ride in summertime when I ride a fat bike, or whenever 3.8-4.2" tires are appropriate in Winter. The Snow Dog will also be upgraded to a ten speed drive train soon as well. I have other bits and pieces in mind for this rig, so stay tuned for more there.

The Ti Muk, or "By-Tor", will be my "expedition" fat bike. I aim to put 90-100mm rims on this rig, probably some funky drive train to clear big ol' tires, and keep it simple. This is going to be the rig I pull out when the snow is deep and I need maximum flotation and traction. I have hubs lined up for it already, and there may be a fork swap on this bike as well. I may be getting my rims later this Summer or early in the Fall, so this upgrade won't happen until the Snow Dog is done first.

My Tamland Two is an awesome rig, but as stock it came with a 52T/36T "mid-compact" front gearing set up. That's a problem for where I live and ride.

See, here in the Mid-West we have plenty of climbing, but it consists of the short, steep, punchy type of climbing, not the extended up or downhill kind of riding featured in more mountainous areas of the World at large. I find that a close ratio front chain ring set with lower than "he-man racing gears" works great. Just like the 46/36 combo on "Orange Crush". On gravel around here, often times just popping down to that 36 from a 46 is all you need to clean the top of the hill, then you jam back into the 46 and motor on. One shift down, one up, done.

So anyway, that 46T ring is a special little deal on the new Ultegra 11 speed, since it has to matchy-match the flowing lies of the crank, not to mention the special four bolt pattern of the crank spider. The special 3-D shape of that ring certainly does contribute to the exceptional stiffness of the ring, and thus allows for smoother, faster shifting, but this also means there is no other alternative than getting one of these rings from Shimano. Thankfully Shimano saw that cyclo crossers might want the 46T outer and I have one coming from Shimano which should arrive any day now. If Shimnao had not seen the wisdom of doing a 46T, well.......I'd have had to do an entirely different crankset. So while I like the technology and what it does, the availability of options suffers, which stinks. Oh........and by the way, so does the black, plasticky look. Blecch! 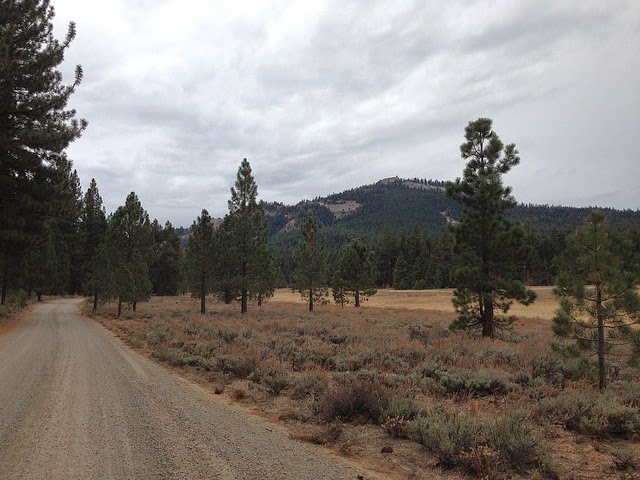 Looking for a tough, fun day on the bike? California has a cool backroad event cooked up that may tickle your adventure fancy. Here's a short description of the course:

The route is 100 miles with 7,000' of elevation gain and is 80% dirt. Also available are two shorter course options; 30 miles and 60 miles. The BIG route starts at Lake Davis, located 15 minutes north of Portola, and takes racers on a rolling tour around the lake, up into the surrounding mountains and then sends them through some of the most beautiful and empty alpine valleys California has to offer.

The event costs $100.00, but it benefits the Sierra Buttes Trail Stewardship, which supports not only cycling interests, but multi-use facets of trail use as well. In other words, lots of folks could benefit from the entry fee monies.  The event features a free food feed, and other things, but for all the pertinent details, go to their website here. The ride happens on May 31st, and there is plenty of spaces left to grab for this inaugural event featuring some of California's most scenic byways of unpaved awesomness. (<====that's a technical description)

Geezer Ride Update: Thanks for the many votes of attendance and kind words about the Geezer Ride idea. I appreciate that and look for updates coming later in the Summer.

And......that's enough randomonium for one post. Thanks for reading!
Posted by Guitar Ted at 1:30 AM