Shop Rat Ride- A Reminder Of The Past 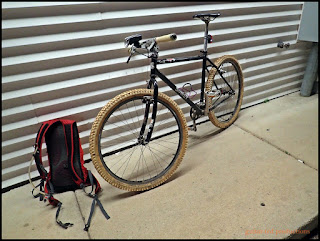 Sharp eyed readers will recognize this bike as the one I got a while back as a hand-me-down since it has always been associated with the shop I work at. If you don't remember or want to check out the back story, see this post.

Well, I hadn't gotten this out to ride since way back in December when I first threw it together. I decided on Tuesday evening to drag it out, de-fenderize it, and take it on a short errand for beer. That whetted my appetite for more and I commuted on it Wednesday to work. Several things struck me as significant about the ride of this bike as I rode it. In no particular order, I'll share those, but first, here is my overview of the 1X1 Surly I have before I list off my impressions.....

The 1X1 as I have it is a sort of "time capsule" bike in that the geometry was informed by the trends of the 90's in terms of 26 inch wheeled bikes. Remember- 29"ers had barely been around in '99 when this frameset was minted and otherwise, it was an all 26"er-all the time world. Everything about this single speed bike reeks of pre-29"er days. Even my build is "vintage" with 90's era wheels, tires, crank set, and 80's era brakes. The newest parts are the bars/stem, grips, seat post, and saddle. So, it is interesting to hop aboard a bike thought to be fine tuned for off road riding circa the late 90's.

Is the 1X1 an antiquity never to be considered a serious off road vehicle then? Heavens no! I would probably change the wheels, first off, to wider rims and tubeless tires. Then I'd get some proper linear pull brakes, because the bike is cantilever only and the old 80's brakes are pretty weak. Maybe a more upright stem? Yeah. If this bike wasn't attached to the legacy it has, I would size up to a 20"er and get a modernized 1X1 with disc brakes, but this old skool ride is definitely not going anywhere anytime soon.
Posted by Guitar Ted at 1:30 AM

I've been commuting the past few weeks on a re-purposed 26" wheeled Soma Groove with what Soma describes as old school NORBA geometry. I actually love how twitchy it is and this type of bike was awesome on New England singletrack back in the 90's.