Tomorrow is the 3rd Geezer Ride to be held in Waterloo Iowa this time. The start is at 8:30am at the Gates Park Swimming Pool parking lot. See the finer details HERE.

I know of about seven folks that have let me know they are heading down/up/over for this ride, which means there are about seven more that will just show up, more than likely, as this has been the way it has gone in the past. That's fine, but my instincts tell me this will have a smaller turn out than the last ride which had 24 riders. Lots going on now so it is understandable.

I'm looking forward to riding with everyone and having a glorious day on the bike. The weather looks perfect and the roads...... Well, who knows! I am sure we'll have some fresh gravel to contend with, as this has been the norm all Summer here. It's okay, we aren't leaving anyone behind and we will be taking things slow and easy.

I might bust out my single speed for this one, but we'll see. It is that or my Raleigh Tamland, I think. There are always some interesting bikes on the Geezer Rides, so maybe I should follow suit and ride an "interesting" bike myself!

If you've been around cycling, particularly mountain biking, you may have heard of "Fixie Dave". He's a Trans Iowa Vet, Tour Divide finisher, and an all around good dude. Well, his rig got stolen....

That's not cool, and I wanted to put this out on this channel to help in some small way. This has been all over social media, but the more the word gets out, the better chances we have of recovering this bike for a good guy.

This is a 2nd Gen Singular Gryphon in the green color, very rare, and one of two XL's ever sold in the country. It's likely that the bike has been stripped down, so be aware that this might show up on some lists as a frame/fork. If it is intact, it is set up fixed, and has only a front Magura brake. The crank set is a Rotor crank, so be on the look out for that as a separate part as well.

Here's hoping this becomes a quick and speedy recovery.

Fatback has been around with fat bikes since, well.....I remember seeing one at Sea Otter in 2007. So, a long time in terms of fat bike companies, that's for sure. They can be attributed with innovating several ideas for fat bikes we all take for granted now. Being up in Alaska, they were right on the whole "expedition" fat bike thing from the start. However; the fat bike market has taken a left turn into trail riding territory, so many companies have altered their geometry, or of the were late comers, started out with straight up trail bike geometry and have left the expeditionary types out in the cold. (<===HA!)

Well, at any rate, Fatback has released two new designs, one in aluminum dubbed the Rhino and one in carbon dubbed the Skookum. Both feature shortened chain stays, slacker head angles, and are based upon the 190mm rear standard which they first developed. 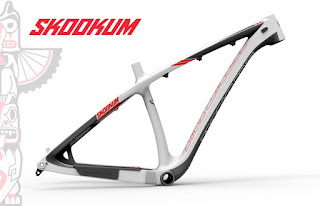 Both bikes feature suspension corrected geometry for 120mm forks and as completes are sold with Rock Shox Bluto forks. Head angle comes in at 68.5°, which is pretty slack for any bike, much less a fat bike.

The Skookum will be available as a frame, or in four different build options featuring different wheel sizes. It has stealth dropper post routing and features a through axle rear end.

The Rhino is available with a rigid, painted to match fork, or in other build options as well featuring multiple wheel sizes. The rhino differs from the Skookum in that it has rear sliding drop outs and can be set up as a single speed rig. It is conceived as a more affordable option to the Skookum and also has two color options available.

That's a wrap! Better get out and ride those bicycles folks. Summer is on the wane and Fall is bearing down on us hard!