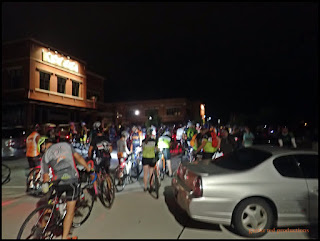 I jumped completely out of the bed and stared at the source of the noise. It was the room's alarm clock, set for 6:00am, only it wasn't 6:00am at all. It really was 3:11am. The clock was waaaaaay off! By the way, if you know your Lincoln music history, this could be construed as a cruel irony. I blamed MW, who is from Lincoln, and whose brother is known as P-Nut. (That's a hint) I shut the danged thing off and went back to sleep, for a little bit, anyway......

Then I woke up again. No alarm clock this time. I checked the time on my iPhone. I was three minutes to having to get up anyway, so I shut off the phone's alarm, and started getting ready to head down to the Fallbrook neighborhood for the start of the 2015 Gravel Worlds. My traveling companion, Tony, was all ready to go and we hit the road at about 5:15 to reach the start with plenty of time to spare before the 6:00am rolling neutral start.

The start was oddly vacant of riders considering that there should be approaching 300 riders there. The time crept forward to 6:00am and we chatted with various folks we saw and knew from previous Trans Iowa events or from other gravel races we've all been to. Suddenly, a bull horn amplified voice was heard, but I have absolutely no idea what it was that was said, as it was from too far away for me to make out clearly. Or maybe my hearing is gone from all the Rock & Roll. One or the other.....

This was about the time that people showed up and the area got packed in with nervous cyclists. Then I saw Corey Godfrey, one of the principals of Gravel Worlds, up on the bed of an early 70's Ford Ranger giving something of a speech. Again- I've no idea whatsoever what it was that was said. I heard the truck fire up, and a cheer went up from the crowd as the thunderous V8 engine came to life. Then moments later I heard the RPM's drop slightly, and I turned to Tony and said, "This is it. He dropped it into drive". Then the cyclists up front were counting down to zero, and before I knew it, I was standing, straddling my bike, watching rows ahead of me clip in and go. Then, it came like a wave and it was our turn to finally set sail on our journey.

Obviously we all had our lights on, as at this time of year it is dark at 6:00am. It would be about an hour before I dared turn off my lights. The rolling start in the dark, amidst the throng of cyclists was a thrill for me. I generally am the one driving the truck leading out the light show, but this time I was a part of it instead. I thought that was pretty cool. However, I also had to be very wary of every cyclist around me, not knowing if these folks were good night riders or not. Then the gravel came. Sandy, loose, deeper road surfaces, and riders were pitching sideways, slowing dramatcally, speeding up dramatically, or veering sideways to avoid someone else. We were a nervous bunch, but fortunately Tony and I were able to get around a lot of this and we picked our way forward through tens of cyclists as we motored along.

This jockeying in the dark went on for a half an hour, maybe 45 minutes, and then we were settling into a good place amongst the throng. Cyclists were fairly spaced out now and the nervousness of the start was forgotten. I noted a cyclist at the side of the road not ten miles in with a flat already. Bummer! But this was a rarity all day from where I was in the group. We did see one other cyclist having issues. At about 18 miles in, we saw a cyclist just remounting and coming back onto the road. Suddenly I hear a loud BOOM! and the guy jumped off his rig. I saw that his tire was completely off the rim. Tubeless failure! The Moots rider looked dejected as I passed him by.

We were flying as the course went pretty much straight North and the 25mph Southerly wind was at our backs. We did go East a bit as well, but even in the crosswind we were making excellent time. Valpraiso was the first pass through town. Tony and I stopped there to re-up with water and eat some morsels. There was a cute pair of kids in the convenience store window I waved at, and they returned the wave with a smile. Good stuff that keeps you motivated.

We hit out from Valpraiso on roads I remembered like I had ridden them yesterday, as this was a similar path as the 2010 Gravel Worlds route. Eventually we were to turn South, and a very long, hard, dusty ride straight into a 25 to 30mph headwind was waiting for us. That said, by this point in the event, 30 plus miles in, I was feeling great.

I was wondering how long it would take until I found myself without a cyclist in view. It was at about three hours in, just after we turned South, and Tony had jetted up ahead of me. It happened again a time or two before getting to Checkpoint #1, but I was figuring out how to meter out my efforts going into these hills and the powerful headwind. Typically, these hills wouldn't have been a big deal, but adding in the extra effort required due to the 25-30mph wind, the hills were quite a significant barrier to forward progress. So, I wasn't very focused on keeping up with Tony at this point. I was most concerned about how I was going to burn my matches here. Eventually, I figured it out and Tony either sat up or I caught back up to him, but we eventually came in together to Checkpoint #1 in Garland, a small village with hardly any buildings.

Reaching the first checkpoint was a good feeling. Jeffrey Bonsall greeted us and the other volunteers were super helpful and cheering us onward. I felt great and Tony and I stayed a reasonable amount of time, resupplying and using the restroom, and then we were off again.

The next stop wasn't a "real checkpoint" but hearkened back to the old days of the Good Life Gravel Adventure and earlier editions of Gravel Worlds where the competitors were required to buy Nebraska Powerball tickets to prove they had passed through certain points of the course. Malcom was the village on our cues, and this village has been a mainstay of Gravel Worlds since the beginning. It was only 9 miles from Garland, but I think 8 and a half were all uphill!

Okay, so the Malcom store stop went well for me. I had something to eat here as well. I had a Coke and some chocolate milk, then Tony and I headed out for the ten miles or so to the Reinkordt Oasis stop. I was feeling pretty chipper yet and we were looking to chop off 75 miles by noon. That was the goal. Even though the wind was contrary, we seemed to be making decent time, and we were optimistic about our chances.

Next: The Wheels Slowly Come Off

Pretty sure that "dejected Moots rider" with the tubeless failure was our own Bobby "Land Run 100" Wintle (District Bicycles / Stillwater, OK)! Woohooo!

I would be curious to know some of the major (road/riding) differences between odins and gw's? My grandfathers grandfather tried to homestead in western NE before our tribe came back to iowa, and I am itching to get out there for a proper tour.