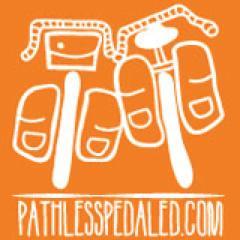 There is another podcast out right now that features myself yakking about the gravel scene and a bit about Trans Iowa. It was an interview conducted by Russ from "The Path Less Pedaled" and if you'd like to hear the almost one hour gab session, click here.

A couple of notes here- First off, this was recorded before Trans Iowa v14. So......I couldn't let on that T.I.v14 was the last, or the cat would have been outta the bag too early. But you may wonder about that because the podcast didn't get released until earlier this week. Well.......

I was supposed to have been video interviewed, but the connection wasn't working for video, so we just recorded the audio track and Russ said he'd make it work out. He wanted an image from me of myself, but Trans Iowa was up next, and then the DK200, and then...... I forgot all about that. I didn't know when Russ planned on releasing the audio, so I kept the news about T.I. mum during the recording.

So, Russ grabbed some video shot during the beginning of the DKXL event at the Dirty Kanza 200 weekend. (I wrote about that moment here on the blog) and pasted that in front of the interview as a lead in. That's something I didn't know he was going to do, so I was a bit surprised by that, and the point of views he used I never had seen before. At any rate, I had no idea even if this podcast would ever get released, much less when, so the deal was a big surprise this week when I came across the mention on Twitter. Check it out if you'd like.......

Maybe you saw my post on this bike for RidingGravel.com. But in case you haven't, Cannondale is now making a 700c based gravel rig. The Slate, the front suspended, 650B rig, continues in the line up as well, but this new rig ticks a lot of "standard" boxes when it comes to current gravel rigs. 42mm tire clearances, (probably a slightly bigger tire will work as well), dropper post compatibility, three bottle bosses with the down tube one being a triple, "Three Pack" type set of braze ons, rack and fender mounts, and through axles front and rear. All carbon fork on all three models. All the basics here. By the way, it has been said it will accept a 650B x 47mm tire as well. They just won't be offered in 650B.

While all that is well and fine, and the bike is aimed at the entry to mid-level buyer, what I was very impressed by was the geometry. Cannondale pushed a few models into their gravel category that were really cyclo-cross bikes and the geometry showed it. Now the Topstone will have, what in my opinion is, an aggressively slack head angle mated with an aggressively low bottom bracket. 71° and 75mm respectively. I like those numbers a lot, and in fact, that was my preferred set of numbers for the Tamland, but in 2012 I thought that telling Raleigh to do that was too radical.

The Topstone will come in three model specs and the top is shown here in SRAM Apex 1. The other two are Shimano 105 and Sora, both with double ring chainsets. I dig that blue color, but I do not dig that drive train! The 105 is a glossy, conservative grey and the Sora is forest green, or close to that with a starting price of 1G. The others go up from there. $1650.00 and 2G actually. The bikes are available now..... 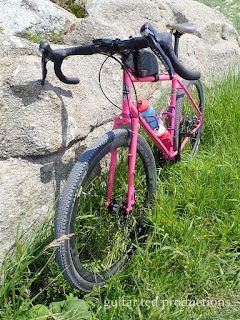 I didn't really give a review of the pink MCD Black Mountain Cycles rig after Gravel Worlds, but I will say a few words now since I have a space to here.

First off, I am not changing a thing. I may as well saw off the steer tube now where I have the stem set and call it finished since I have zero complaints about the way I fit the bike. All the careful measuring I took off my other bikes paid off with a perfect fit the first time. Trust me, I am pretty surprised I nailed it!

The big tires are the way to go for me. The Riddlers are good. I think Resolutes would be even better. I need to try them on here sometime. But other than that, the bike is perfect. Thanks to Ben Witt and Whiskey Parts for the incredible No. 9 24 Drop Bar and the super-smooth No. 7 Seatpost. The ride of this bike is totally calm and smooth mainly due to these two components. Also, my bum left shoulder has never been happier! Well, since it's been a "bum shoulder", that is.  So, I am tickled pink, (sorry!), about these parts on this bike.

During the Gravel Worlds event I had really awesome stability due to the geometry of the bike and the tire/rim combination. The looser sand and pea gravel down there never threw me for a loop and I could even dart across the center line of the road at high down hill speeds without fear of washing out or fishtailing. The wasboard, which was all over the course, was sucked up big time by the bar, post, and my Redshift Shock Stop stem. The whole package really made it so my body wasn't beat up at all over the course of the 24hrs of Cumming or Gravel Worlds.

Finally, a word about the fork. It is really smooth. I was afraid that since the disc brake change was coming that the new fork wasn't going to feel like the old cantilever brake Monster Cross fork does. But I have no worries about that after having done two different kinds of gravel in two different states. That fork works very well, and you can see it working. Just like you can with the cantilever based fork.

In my humble opinion, both Monster Cross variants are home runs for gravel or all-road riding. Mike Varley has done it again, and now I have another bike I'll never be letting go of. I look forward to a lot of adventures on my new Bubblegum Princess and continued adventures on the Orange Crush.

That's all for this week. Have a great weekend and get out and ride!

I don’t think that bike is even made it to their website yet. I think they could haave done a bit better with colors and graphics.

@Ari- It went live at 9:00EST, this post was a little ahead of the official release. (I got the press release after I posted on Riding Gravel, which is also being updated this morning with the "official info".)

Glad to see that the Bubblegum Princess works and rides as sweet as it looks. I recently installed a Redshift shock stem on my old Fargo due to bad wrists and your recommendations and can't say enough good things about it.
Back to the "Princess". I have some pink cable tips which I have absolutely no use for if you'd be interested in a little extra bling. Can send to Europa or where ever you'd like, no charge whatsoever. Maybe you could give a couple to Sam also, the next time you see him.

Now that you've had a couple of longer rides on the Whiskey bars, what is your opinion of them vs. the Woodchippers? Looking to maybe make the leap to a carbon drop but they look fairly similar on paper.

I dug the PLP interview.

I finished building up my MCD frame yesterday and took it for its first dirt/gravel ride today and it reminded me of nothing more than my canti BMC Monster Cross, a bike I immediately regretted selling. The changes Mike made were all to the better for me. More stack, less reach, lower BB, sloping top tube, more attachments for bottle cages, racks, etc., thru axles, disc brakes...

I was happy that my fit calculations were also spot on and so I was able to get the bar position I need with a 90mm 6 degree stem instead of the 100mm 30 degree stem I had to use on my All-City Cosmic Stallion. The fit felt even better in fact. I'm going to get a RedShift Sports ShockStem as soon as they are back in stock. The Syntace P6 HiFlex stem works better with the more sloping top tube and resulting more exposed post compared to the Stallion. Frankly, I was very happy with the All-City bike and expected to keep it for several years, but once I heard that Mike was going to make a disc version of the MC and especially when I saw the geometry numbers, I knew it was going to be for sale.

Not to mention it is a damned good looking bike.

@GOTA- Thanks for that comment. I like what Russ is doing, but as far as being part of Riding Gravel, well, he has developed his brand to such an extent it would probably be a step backward for him. (My opinion) But yes, there is a synergy between what he is doing and what we are doing here at RG.

@baric- Thanks and yes- Go ahead and send those to Europa Cycle C/O Guitar Ted. Thank you!

@Rob E- Okay, that's hard for me, because I despise Woodchippers. So, my heavily biased opinion is that just about any decent drop bar which is flared is better than a Woodchipper. But seriously.....

The carbon layup of this Whiskey bar is so sweet and smooth, I cannot imagine that anything else compares except maybe a Carbon Cowchipper. I highly recommend these. Bonus- Carbon doesn't transmit heat well, so they stay warm in Winter and don't get hot in the Sun as easily in Summer.

@Blues Dawg- I am happy that you have found a similar feeling about your new MCD. I also agree that it looks killer. Mike knows beautiful proportions and it shows in his products.

Interested on what you think of he new Giant Revolt Advanced. It looks the goods from my amateur eye.

Are the carbon bars good for Clyde’s like me? I’m a 240lb gorilla with a bum shoulder so the comfort would help.

Thanks for all the great reviews!