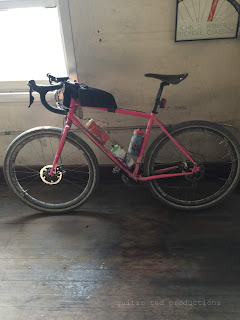 Well, not really much of a gear review  as it is a further word on the Black Mountain MCD, or as it has been dubbed, the "Bubblegum Princess", or BgP for short.

Essentially what I am finding is that it feels and rides a whole lot like a Gen I Fargo to me. Long time blog readers here will find that as high praise because they know how much I like that bike. I just fits me, and the ride is very comfortable.

It does handle a bit differently than the OG "Orange Crush" Black Mountain Cycles bike I have. It doesn't feel as short, and it feels as though I am a bit more "in" the bike and "behind" the bars which is what I prefer on a gravel rig. I don't like bicycles that make it feel as though the front wheel is pinned down either by geometry or weight distribution, or both. Those sorts of bikes don't handle looser, deeper stuff well at all. In other words, most gravel I travel.

When I set up this bike I had the benefit of having two other bikes I had spent a lot of gravel time on around here and, of course, the Fargo. Between the three I basically set the BgP up as something in between those bikes. Not as high and stretched as the Fargo, but not as low and compact as the Orange Crush or Tamland.

I said that I may tweak the set up, but honestly, I don't think that is going to happen after riding it this past weekend. The RedShift Sports ShockStop stem is amazing on here and I can highly recommend the Whiskey seat post that I have on here. VERY comfy! The Whiskey carbon bars are great as well. My bad shoulder never gave me any aches or pains from vibrations all weekend.

This came out last Tuesday, but you should give it a listen. I didn't know how it would be as a podcast, but this conversation between myself and my "Team Pink" partner, Sam Auen came out really good, I thought. I figured that if it makes me laugh out loud, think, and generally feel good, then maybe you would like it too.

We rambled for sure since we had zero planning going into this. You can tell at the beginning and at another point where we really didn't know what to do, but for 95% of it we were pretty much on fire, and the dang thing is two hours long!

We cover the death of Trans Iowa, some good TI stories, and then we get into the future of gravel, and what will keep it going strong from here. Like I have said elsewhere, there are swear words and you may not want to play this out loud in front of certain folks. Otherwise, enjoy! I had a blast doing it.


Sam has a post-event podcast in the can that we did, listen to that HERE. Again- it's sweary, so NSFW and certain tender ears. This episode is a bit more focused on the event. 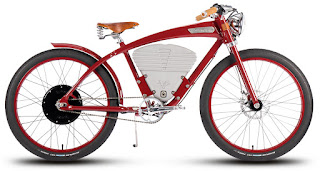 The tariff on bicycles and related parts, plus raw materials which I wrote about last week is in the news again. It is being reported by the trade publications that the 25% tarrif on e-bikes is going to be implemented.

This will have a detrimental effect on many e-bikes because most of them are manufactured in China at present. However; efforts are being made to move production by many companies. Not to the U.S.! Oh no...... But to cheap labor sources like other Southeast Asian nations, India, and Eastern Europe.

My view is that outside of the larger urban areas e-bikes are seen as being too expensive as is. This tariff will now affect those inner-urban centers where these sorts of bicycles are flourishing and pretty much kill e-bike sales in places like the areas I live in. I don't see e-bikes being real hot around the Mid-West anyway. What I do see are do-it-yourself conversions using gas motors and a few electric ones. Scooters with chainsaw motors and the like. Mad Max-like stuff. This tariff will only push that sort of thing further along in these parts.

Okay, Summer is winding down. What are you waiting for?! Get out and ride!

I was all set on getting the Black Mountain Cycles Monster Cross, but have been having second thoughts and wonder whether I should get the MCD instead. I see that you feel like the two bikes ride differently (and that's what Mike Varley intended), but if you had to pick one, which would you pick and why? Or maybe an easier question is do you think I can get many years out of ?

@J- Well, that's tough. But I will tell you that I feel like that a rig that is going to be relevant for several years to come will have through axles and disc brakes. Are those things necessary? Nah.....

If you like classic lines and don't mind not having the latest/greatest wheels/brakes, then the Monster Cross is crazy good.

Thanks for sharing your thoughts! By the way, I only discovered your blog a few months ago, but I have really enjoyed reading both the current content and the back content.

@J- Cool! Welcome, and please spread the word about the blog.